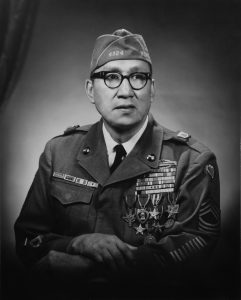 Master Sgt. Woodrow Keeble was a decorated Soldier and leader in World War II and the Korean War. His accomplishments and bravery in combat inspired his fellow Soldiers and enabled the U.S. Army’s success in battles throughout both wars. For his actions in Korea, Keeble was posthumously awarded the Medal of Honor by President George W. Bush on March 3, 2008.

Woodrow Wilson Keeble was born on May 16, 1917 in Waubay, South Dakota, to Isaac and Nancy Keeble. Keeble and his family were members of the Sisseton Wahpeton Oyate (nation) of the Santee Dakota People. He spent his early life on the Lake Traverse Reservation in northeastern South Dakota. His family later moved to Wahpeton, North Dakota, where he attended the Wahpeton Indian School, now known as the Circle of Nations School. There he excelled at many sports, especially baseball. His arm strength garnered the attention of several professional teams and led his team to a 10-0 record his senior year.

After the United States entered World War II following the Japanese attack on Pearl Harbor, Hawaii, Keeble cut short his baseball career and enlisted in the 164th Infantry Regiment of the North Dakota National Guard. His unit was called into action in 1942, deploying first to Louisiana for training before departing to the Pacific Theater in October of the same year. The 164th Infantry was the first U.S. Army unit to land at Guadalcanal, where Keeble first saw combat near Henderson Field on South Pacific Island. Other Soldiers immediately recognized Keeble’s impressive bravery and ability while fighting the occupying Japanese Imperial Army, sometimes hand to hand. After the war, fellow Soldier James Kenelon said that Keeble would “go in front of patrols and kill enemies before his unit would get there,” and that sometimes the safest place on Guadalcanal was “right next to Woody.” For his actions on Guadalcanal and later engagements in the Pacific Theater, Keeble received the Bronze Star and Purple Heart medals.

After World War II, Keeble returned to the Wahpeton area, where he taught at the same school he attended as a child. When the Korean War began, Keeble re-enlisted in the 19th Infantry Regiment, 24th Infantry Division, and was sent to Korea in January 1951. There, he was assigned to Company G, 2d Battalion, 19th Infantry, as the unit attacked North Korean forces near the Kumsung River in September 1951. Keeble rose rapidly through the ranks and was promoted to master sergeant. He commanded an infantry platoon for the company’s attack on Hill 765, a heavily fortified position near Sangsan-ni, Korea. It was on the steep, rocky slopes of Hill 765 that Keeble displayed the bravery and dedication to duty that exemplified his life of service.

On October 20, 1951, Company G attempted to dislodge the enemy from their bunkers and trenches atop Hill 765 to enable other U.S. Army units to continue their attack. After three assaults by Company G were repulsed with heavy casualties, Keeble decided to attack the position alone. His step-son said after the war that Keeble “was more concerned about losing his men than about losing his own life … He pushed his own life to the limit. He wasn’t willing to put his fellow Soldiers’ lives on the line.” Keeble attacked the enemy machine gun nests with his Browning Automatic Rifle and grenades, using his experience as a baseball pitcher to lob grenades toward the enemy from almost 50 meters away. As the enemy concentrated all of its fire on Keeble, he continued to crawl to another enemy position, knocking it out in a similar manner before ordering the rest of Company G to attack the hill. His actions both enabled Company G to seize Hill 765 and saved the lives of countless Soldiers in the unit. Although wounded in the action, Keeble remained with his unit for another nine months, fighting alongside Company G in campaigns across the Korean peninsula. In August 1952, he was honorably discharged from the Army having earned the Distinguished Service Cross, the Silver Star, and the Purple Heart medal with an oak leaf citation for his actions in 1951.

After the war, Keeble returned again to Wahpeton and taught at the Indian School. Keeble suffered a series of debilitating strokes soon after the Korean War, and became partially paralyzed as a result. He struggled in his later life due to his disabilities and the death of his first wife, Nettie. In 1967, Keeble remarried Blossom Iris Crawford-Hawkins, who was the first Santee Dakota woman to earn a doctorate in education at the University of South Dakota. He remained a supporter of several veteran’s organizations until his death in 1982.

Although Keeble didn’t live to receive the proper recognition for his bravery, sacrifice, and devotion to duty, his actions left an indelible mark on the Sisseton-Wahpeton Tribe, Santee Dakota Oyate, and the United States. At the Medal of Honor ceremony, President Bush summarized the duty Americans have to remember Keeble, stating that “there are some things we can still do for him. We can tell his story. We can honor his memory. And we can follow his lead—by showing all those who have followed him on the battlefield the same love and generosity of spirit that Woody showed his country everyday.”