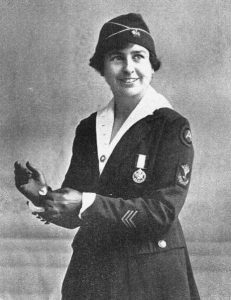 As the Chief Operator of the U.S. Signal Corps’ female switchboard operators during World War I, Grace Banker served in one of the few non-medical roles available to women. Banker led her unit on the war front, working through dangerous conditions. Switchboard operators in World War I, nicknamed “Hello Girls,” were bilingual women called to Europe to assist with Army communications as contractors. They communicated messages across Europe to support the Allied forces. Their work was widely commended, with Gen. Edgar Russell declaring them “indispensable.” In 1919, Banker received a Distinguished Service Medal for her work and leadership. However, she and her fellow Hello Girls did not earn recognition as veterans until 1977.

Grace Derby Banker was born in Passaic, New Jersey in 1892 to parents who valued education deeply. She pursued higher education at Barnard College, a private women’s college, and graduated with degrees in French and History. After graduating, Banker began work as a telephone operator for the American Telephone and Telegraph Company (now AT&T), one of the few jobs available to women at the time. Banker’s skills were quickly recognized, and she rose to the role of switchboard instructor. In December 1917, Banker found an advertisement from the U.S. Army seeking bilingual women who could operate switchboards. Her brother, Eugene, was already abroad serving in the Army, and Banker took the opportunity to contribute to the effort herself.

She responded to the advertisement and, due to her education and experience, was chosen to head a team of 33 female telephone operators, dubbed “Hello Girls.” After a few months of training, Banker and her unit set sail for Gen. John J. Pershing’s headquarters in Chaumont, France. Banker wrote in her diary upon her departure from New York Harbor, “Watched the Statue of Liberty fade from sight. For the first time, I suddenly realized what a responsibility I have on my young shoulders.” Upon landing in Europe, Banker spent five months in Chaumont before transferring to the First Army headquarters at Ligny-en-Barrois to serve as the Chief Operator. There, she and six other operators supported the American assault on German-held St. Mihiel by sending, decoding, and intercepting messages.

Her small group then moved to Bar-le-Duc, where they provided communications for the Meuse-Argonne offensive, a series of battles that ultimately led to the Allied victory. Banker and her fellow operators, equipped only with gas masks and helmets, worked long hours through aerial attacks and lack of heating in the cool autumn weather. At the height of the war, Hello Girls connected 150,000 calls a day. Following the Armistice on Nov. 11, 1918, Banker and her unit transferred to Paris. There, she worked at President Woodrow Wilson’s temporary French residence, but found the work dull compared to her previous work on the warfront. She then jumped at the opportunity to join the Army Occupation of Coblenz, Germany where she stayed until 1920.

While working in Coblenz, Banker received the Distinguished Service Award. She was one of only 18 Signal Corps members granted this award. Despite her celebrated service, however, Banker and her fellow Hello Girls were not considered Soldiers. As a result, they were ineligible for veteran’s benefits at the end of the war. In September 1920, Banker was discharged as a civilian under contract and returned to the United States after 20 months of service. Upon her return, she married Eugene Paddock and moved to Scarsdale, New York. Banker dedicated the rest of her life to raising the couple’s four children. She spoke openly and fondly of her time in the Signal Corps, remembering, “… [our work] made [me] a bigger person than [I] was before.”

Banker passed away on Dec. 17, 1960 of cancer in Scarsdale. At least 20 bills granting Hello Girls veteran status were rejected by Congress over her lifetime. Finally, in 1977, President Jimmy Carter signed legislation granting female members of the Signal Corps veteran status, almost 60 years after the end of World War I. Only 18 Hello Girls were alive to celebrate this achievement. The success of Banker and her unit paved the way for women’s integration into the Army.