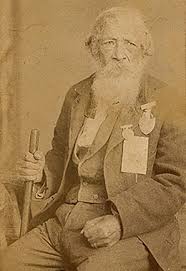 New Orleans celebrates both music and military history. One of the most
acclaimed African Americans in New Orleans history fits in both categories,
Jordan Bankston Noble. Born enslaved, he served as the drummer of the 7th
Infantry Regiment during the War of 1812. Also serving in Mexican-American
War and Civil War, Noble contributed to the battlefield success of the units
with which he served. Despite racial prejudices and enslavement, Noble
socially advanced to become an iconic figure in New Orleans.

Born in Augusta, Georgia in 1800 to an enslaved mother, Judith, and an
unknown white father, Noble grew up enslaved. Noble and his mother lived in
Georgia and then Louisiana. They were purchased by Jean G. Chaumette, a
slave trader, on Nov. 15, 1813. Chaumette then sold Noble and his mother to
Lt. John Noble of the 7th Regiment on June 2, 1814. Despite Army regulations
forbidding officers from using enslaved labor in the field, Noble and Judith
helped the regimental officers with their duties. In late 1814, Maj. Gen. Andrew
Jackson called for recruits of all colors and backgrounds to defend New
Orleans from the British. Over 400 African Americans answered Jackson’s call,
including Noble. He jumped at the opportunity, joining the 7th Regiment as
their drummer. Drummers, often known as “Drummer Boys” due to the young
age of many, played an important role in the Army in the early 19th century.
Their music helped with Soldier morale as well as communicating orders.

While with the 7th, Noble took part in the most memorable battle of his
military career, the Battle of New Orleans. Though the War of 1812 officially
ended with the signing of the Treaty of Ghent on Dec. 24, 1814, the news
travelled too slowly to reach New Orleans in time. On Dec. 23, 1814, Jackson
led a surprise attack on British forces that were marching on New Orleans. The
7th, under Jackson’s command, attacked a key part of the British lines. Fierce
fighting broke out and continued for more than two hours. A steady fog
enveloped the battlefield and Noble’s steady drum beat helped the Americans
stay organized. Historian Marcus Christian wrote of that day: “Following
Coffee’s men was the United States 7th Regiment, its 14-year-old mulatto
drummer-boy, Jordan B. Noble, beating away on the regimental drum…it was
this boy’s drum, rattling away in the thick of battle…that helped to serve as one
of the guideposts for the fierce battling American troops.”

After the indecisive engagement on December 23, Jackson positioned his
troops, including Noble and the 7th, on a strategic hilltop outside New Orleans.
On Jan. 8, 1815, an 8,000 strong British strike force commanded by major
general Sir Edward Pakenham attacked Jackson’s force of 5,700. The
Americans repulsed a British frontal assault, suffering 62 casualties to
Pakenham’s 2,034. Despite distinguishing himself in combat, Noble and his
mother remained enslaved after the end of the war.

When Lt. Noble died in 1817, he gave Noble and his mother to Col. Alexander
White, a major in the 7th during the Battle of New Orleans. Stricken by poverty,
White sold Noble and his mother to John Reed, a musician, and veteran
seaman. Reed allowed Noble to pursue music, start a family, gain an
education, and continue his military service. Noble served in three more wars
as a drummer: the Seminole War, the Mexican War, and on both sides during
the Civil War. At some point during this time, Noble gained his freedom from
enslavement, although historical record does not indicate how or when he
gained it.

Throughout his military service and retirement, Noble played music on his
drum for the people of New Orleans. He led parades and became a cultural
fixture of New Orleans in the 19th century. On every anniversary of the Battle
of New Orleans, Noble and other Black veterans of the battle marched down
the streets of New Orleans, with Noble performing the music he played during
the battle. Celebrated by New Orleans’ Black community, Noble, or “Old
Jordan” as many people called him, remained especially proud of his service. In
1859, Maj. Gen. Winfield Scott visited New Orleans. After listening to Noble
perform, Scott met with him and asked him about his service. Upon seeing
Noble proudly display his battle scars, Scott simply asked rhetorically, “How
come you to get so near to the enemy, Jordan?” Noble lived to the age of 90,
dying in his beloved city of New Orleans on June 20, 1890. Though enslavement
led him to join the 7th, Noble served in the Army for dozens of years. Though
he lived a long life and served for dozens of years, Noble always wanted to be
known for his service as the drummer boy of the Battle of New Orleans.