Over Here, Over There: The United States Service Organizations (USO) and the U.S. Army 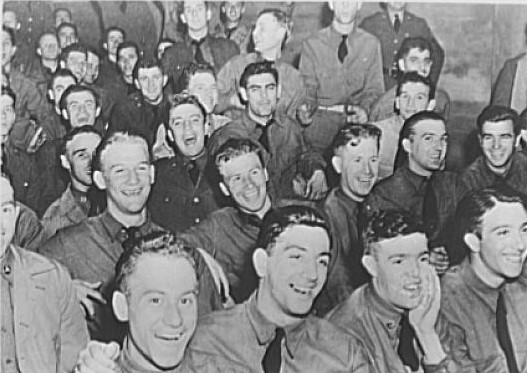 Audience response to the USO Camp Show. Library of Congress

Goal: Recognize how the Army values of selfless service and duty were channeled by civilians to support and uplift Soldiers during one of the darkest times in American History.

Program Description:
Laughter, celebrities, and frivolity are the sounds and images most closely associated with the United Services Organizations (USO) and more specifically the “Camp Show.” These professional-quality variety shows featured America’s most popular comedians, vocalists, and actors including Bob Hope, Lena Horne, Judy Garland, and Lucille Ball in some of World War II’s most uncertain battlefields. The shows brought Soldiers a brief respite from the uncertainty that lay ahead and an outlet for stress associated with wartime service.

While the lively nature of the “Camp Shows” stand out in American memory, the USO, provided both places of lively social activity and quiet contemplation to Soldiers seeking a morale boost, religious comfort, or a distraction. The USO was incorporated on February 4, 1941, to provide recreational opportunities and resources for World War II service members. The organization combined six social organizations into one formidable group that operated over 3,000 recreational clubs across the globe to provide Soldiers with lodging, food, resources, and entertainment.

Learn how the Army values of selfless service and duty were channeled by civilians to support and uplift Soldiers during one of the darkest times in American history. Identify how those values have been carried on since World War II to support Soldiers through times of war and peace.

Guiding Questions:
How do civilians support the Army?