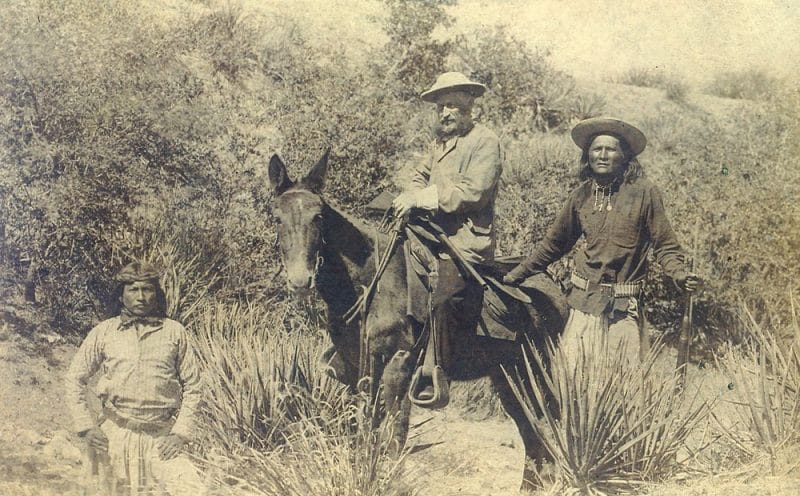 Alchesay was born in 1853 between Globe and Show Low, Arizona to a prominent White Mountain Apache family. Alchesay’s father Pedro was always friendly towards the United States and became the chief of his tribe. Pedro, a prosperous farmer, led Alchesay towards success. Pedro urged his son to aspire to be the next chief of the White Mountain Apaches and taught him the skills he needed to succeed in that goal. When the United States asked their tribe for scouts in the wars against other Apaches, Alchesay answered the call, enlisting as an Indian Scout in December 1872.

The U.S. Army used Apache Scouts to guide their troops in unfamiliar territory. Alchesay served during the Tonto Basin Campaign in 1873 under the command of Lt. Charles Gatewood in the 6th Cavalry Regiment. His service with Gatewood later transformed into a lasting friendship, as they worked together during war and peace. Alchesay and Gatewood’s scouts often joked with each other as friends. A running joke among the group revolved around Gatewood’s nickname Bay-chen-daysen or “Long Nose.” After the campaign ended Alchesay returned home. On the recommendation of General George Crook, Alchesay received the Medal of Honor on April 12, 1875. The United States recognized Alchesay for his gallant conduct during the campaigns against the Chiricahua.

As a prominent member of the Apache community, Alchesay served as a mediator in local disputes. In October 1884, Alchesay’s relationship with Gatewood helped solve a dispute between a local merchant and the White Mountain Apaches. A shopkeeper named Mr. Zuck and his contractor, Mr. Kay, agreed to give the Apaches $10 and an ox in exchange for hay. However, the ox delivered to the Apaches was unhealthy. Often, these types of disputes turned violent. The U.S. judicial system frequently ignored Native Americans, usually excluding them from juries. Because of this, native tribes turned to raids and warfare to settle disputes. Instead, Alchesay asked Gatewood for help. Gatewood arrested Kay, ending the situation. In doing so, Alchesay ensured his people received justice through peaceful means at a time when that was not expected.

In 1886, he once again served in the Indian Scouts, this time not only as a scout but also as a translator during negotiations with Geronimo. Geronimo had led a band of Chiricahua Apache in opposition to the United States and its reservation system. Pursued by Gatewood and his troops, Geronimo and his warriors fled to Mexico. In March 1886, Gatewood caught up to Geronimo’s troops and began negotiating for Geronimo’s surrender. Geronimo asked Alchesay to translate some of the proceedings. Alchesay spoke both for himself and Geronimo’s band, saying,

Alchesay’s successful career proved that friendship between the United States and the Apache was not only possible but beneficial. His service as an Apache Scout and skills in negotiation earned him the respect of American officials and his fellow Apache. He calmed tensions and fought for peace. Alchesay earned the trust of the White Mountain Apaches and became their chief after he retired from the Army. As chief, Alchesay advocated for education within his tribe. He helped create the first American school on his reservation in 1924. Alchesay retired his role as chief in 1925.

Alchesay died at North Fork, Arizona in 1928 after 14 years of service to the U.S. Army and many years as chief of the White Mountain Apaches. He is buried at the Apache Indian Reservation in Whiteriver, Arizona. In honor of his legacy, three places in Arizona bear his name: Alchesay Canyon in Maricopa County, Alchesay High School in Whiteriver, and Alchesay Barracks at Fort Huachuca. His remarkable impact on the U.S. Army is reflected in his receipt of the Medal of Honor in 1875 and induction into the Military Intelligence Hall of Fame in 2012.

Department of War, Senate Permanent Select Committee on Indian Affairs. Letter from the Secretary of War, transmitting in response to Senate resolution of March 11, 1890, correspondence regarding the Apache Indians. Ex. Doc. No. 88. Washington D.C.: Senate, 1890.