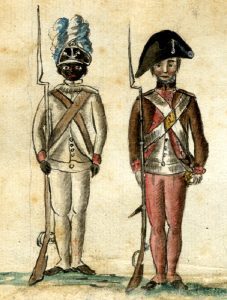 American Soldiers at Yorktown in 1781 as depicted by Jean-Baptiste-Antoine deVerger. Brown University.

Goal:
Learn how the Continental Army, through the lens of three individuals, united around a common cause during the Revolutionary War.

Program Description:
Over 200,000 Americans served in the Continental Army during the Revolutionary War. These diverse individuals came together to eventually form a functioning and professional Army. Join us to explore how American patriots worked together to create the Continental Army by examining the uniforms, equipment, and weapons of Revolutionary War Soldiers.

Objective: At the end of the lesson, students will be better able to:

What are the origins of the United States Army?

How did the items that Soldiers carried during the Revolutionary War help carry out the Continental Army’s mission?

VS.5. – The student will demonstrate an understanding of the role of Virginia in the American Revolution by