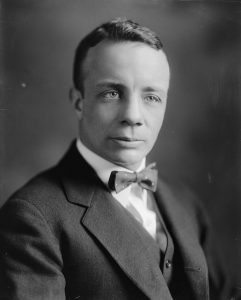 Theodore Roosevelt III, often referred to as Theodore Roosevelt Jr., was a veteran of both World Wars and a Medal of Honor recipient. A member of the historic Roosevelt family, he was recognized as a strong leader in World War I when he commanded the 26th Regiment’s entry into France. Later, as the Assistant Division Commander of the 4th Infantry Division, Roosevelt was the only U.S. general to land with the first wave of troops on D-Day.

The eldest son of President Theodore Roosevelt, Theodore Roosevelt III was born in 1887 at the start of his father’s political career. Growing up, he felt the weight of his father’s hefty expectations. He graduated from Harvard University, his father’s alma mater, in 1909. The following year, Roosevelt met and married his beloved wife, Eleanor Butler Alexander, with whom he had four children. As a young man, he went first into banking, and later publishing. Roosevelt’s true desire, however, was to serve in the military as his father had.

Roosevelt was among the first Soldiers to volunteer upon the United States’ entry to World War I. He was assigned to France in 1917. By the end of the war, he commanded the 26th Regiment, 1st Division as a lieutenant colonel. Roosevelt’s brothers also served in the Army. Archibald was commissioned as a second lieutenant. Quentin joined the Army Air Service, but was killed in action when his plane was shot down over Chamery, France. Roosevelt himself was shot in the leg at the Battle of Soissons. After the war, Roosevelt was among the founding members of the American Legion, a nonprofit organization that continues to support American veterans today.

Following the end of World War I, Roosevelt served in the Army Reserves and also began a political career. A likeable personality, Roosevelt easily built off of the strong relationships his father had fostered with members of the Republican Party. In 1919, he was elected to the New York State Assembly. Soon after, President Warren Harding appointed him as assistant secretary of the Navy, bridging his political and military connections. In 1924, Roosevelt ran as the Republican candidate for governor of New York, but lost the race. He continued his political career as the appointed governor to Puerto Rico in 1929, and later governor-general to the Philippines. During this period, he studied Spanish, becoming the first known American governor to do so. He returned to the United States in 1935 upon the change in administrations and resumed his work in publishing.

At the outbreak of World War II in Europe, Roosevelt attended a military refresher course and returned to active duty in April 1941. Once the United States entered the war, he served under General George S. Patton in the African theater before being reassigned in February 1944 to the European theater. In preparation for the D-Day landings, Roosevelt requested to accompany his troops ashore, but the request was denied. He then submitted a written request, which was approved reluctantly. The division’s commanding general, Maj. Gen. Raymond “Tubby” Barton, did not believe Roosevelt would survive the attack. In fact, Roosevelt’s request likely would have been denied had Barton been aware of the reality of his medical history.

Roosevelt lived with a heart condition, which he kept secret from Army doctors. He also had arthritis from past injuries, which caused him to use a cane. Roosevelt carried the cane with him as he stormed Utah Beach. At 56 years old, he was the oldest Soldier in the invasion. Roosevelt’s son Quentin, an Army captain named after Roosevelt’s late brother, was also in the first wave. Both father and son survived the invasion. Years later, General Omar Bradley stated the most heroic action he ever witnessed was, “Ted Roosevelt on Utah Beach.” Roosevelt’s leadership on D-Day was immediately commended, and he was a recommended recipient of the Distinguished Service Cross. Before he could receive the honor, however, Roosevelt died of a sudden heart attack while on vacation in France on July 12, 1944. He was 56 years old. After his death, the Distinguished Service Cross recommendation was upgraded to the Medal of Honor, making Roosevelt and his father only one of two parent/child pairs to both receive the award. His widow accepted the medal on his behalf.

Roosevelt is interred with his late brother, Quentin, at the American Cemetery in Normandy, France. The Roosevelt home and orchard at Sagamore Hill in Oyster Bay, New York was donated to the National Park Service, continuing the family’s legacy of supporting national parks. The Roosevelt family continued their tradition of service for generations to come.