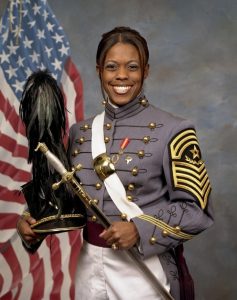 Known as a fierce, dedicated, and giving soul, 2nd Lt. Emily Perez’s tireless desire to help others guided her path through the United States Military Academy and into the United States Army. After commissioning into the Medical Service Corps in 2005, Perez was killed in 2006 when her Humvee struck an improvised explosive device. She was the first African American female officer killed in combat and the first in the West Point Class of 2005 to die in Iraq.

Emily Jazmin Tatum Perez was born in Heidelberg, West Germany in 1983 into a military family. Her father served in the Army and Perez spent the majority of her childhood in Germany until the family returned to the United States in 1998. Perez excelled in high school and became the captain of the track team. In her free time she volunteered at her local church, where she founded an HIV/AIDS program, and worked with the Red Cross. In 2001, she graduated from Oxon Hill High School, Maryland in the top 10% of her class and accepted an appointment to the United States Military Academy at West Point.

Perez started at West Point in July 2001. As a freshman at the time of the September 11th attacks in 2001, Perez’s class became known as the “Class of 9/11.” She and her classmates had entered West Point during a time of peace but would graduate into an Army at war. Despite the uncertainty of the world around her, Perez quickly distinguished herself as a leader. In her free time, she tutored other cadets, wrote motivational letters to those thinking of quitting, sang in the choir, and ran on the track team. Her characteristic drive and determination permeated every aspect of cadet life. Her performance earned her the position of cadet brigade command sergeant major, the first female African American to hold the post. Perez’s new responsibilities included enforcing West Point’s policies, ensuring the welfare of her cadets, and providing guidance to other leadership positions. Her fiery conviction and boundless energy earned her nickname “Taz,” short for Tasmanian devil. Perez graduated alongside the rest of the “Class of 9/11” in 2005. Over the next 12 months, Perez and about 70% of her classmates would find themselves in Iraq or Afghanistan.

Perez commissioned into the Army Medical Service Corps as a second lieutenant. Assigned as the Treatment Platoon Leader in Charlie Company, 204th Support Battalion, 4th Infantry Division she deployed to Iraq in December 2005, just seven months after leaving West Point. In doing so, she laughingly remarked that she would “be there and back before those guys [her combat arms classmates] even get their boots in the sand.” Though Medical Service Corps officers typically run aid stations, Perez primarily served as a convoy commander leading Humvees between military bases in Iraq. Her fellow Soldiers remembered Perez always taking a spot in the lead Humvee, the most dangerous position in the convoy. “She led by example,” recalled Spc. Travis Truesdell, one of the Soldiers with Perez the night she died.

On September 12, 2006, Perez volunteered to lead a convoy in Al Kifl, Iraq . Around 11 p.m. that night, the lead vehicle hit an improvised explosive device; Perez, in her customary position, died instantly in the attack. The three other Soldiers in Perez’s vehicle were medically evacuated and survived, while the rest of her convoy escaped harm. Perez was posthumously awarded a Purple Heart and Bronze Star for her service and sacrifice. The Smithsonian Institution highlighted Perez at the National Museum of African American History and Culture, where her story continues to inspire visitors to this day. Her identification tags, desert cap, and desert camouflage coat are on display in the Changing World Gallery of the National Museum of the United States Army. She is buried at West Point.