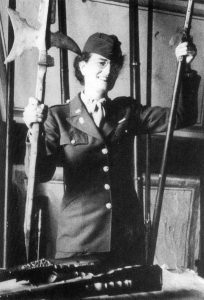 Though the Monuments, Fine Arts, and Archives (MFAA) division was nicknamed “the Monuments Men,” Capt. Edith Standen made her mark as the only female member of the division to be awarded a medal. As one of the world’s top experts on European tapestries, Standen was brought on to the MFAA to assist with their preservation efforts. Due to the work of Standen and the MFAA, many important pieces of art were saved for future generations to enjoy.

Standen developed a love of the arts through her childhood travels. Edith Appleton Standen was born in Halifax, Nova Scotia on February 21, 1905. Her father was a British Army officer. As a military family, the Standens moved regularly throughout Edith’s childhood, living in Canada, Ireland, and England. Standen attended Somerville College in Oxford, England. There, she studied the English language and literature but was fascinated by archaeology. One summer, Standen spent her vacation at a Roman archaeological dig in England. She graduated in 1926 and decided to move to Boston two years later.

Standen soon realized that she wanted to work in museums. However, it was hard to find work in the field. Before she left England worker strikes sprang up around the country, followed by the beginning of the Great Depression in 1928. Her mother, formerly an American citizen, had family in Boston which influenced Standen’s decision to move. After arriving in the United States, however, she found work at the Society for the Preservation of New England Antiquities (now Historic New England) while volunteering at Harvard University’s Fogg Museum. While volunteering, she met Paul J. Sachs, who invited her to take part in his museum administration course. That course introduced Standen to many of the future members of the MFAA. Following the completion of the course, Sachs helped Standen secure a job as a secretary for Joseph Widener, a wealthy businessman and art collector.

Standen left her position with Widener after he donated his collection to the National Gallery of Art in 1939 due to his failing health. During her time working with Widener, she visited Munich, Germany, where she felt encouraged to enlist in the Army. Standen’s mother was required to give up her American citizenship to become British, and Standen was concerned her decision to change her citizenship would feel like a betrayal. After years of putting it off to avoid hurting her mother’s feelings, Standen became an American citizen in 1942. In April 1943, she enlisted in the Women’s Army Corps and was initially stationed in Ohio with the Women’s Army Air Force. Due to her background, though, she was transferred as a first lieutenant to the MFAA as a Fine Arts Specialist Officer on June 4, 1945. Her first assignment in the MFAA was to inspect the art in the Reichsbank in Frankfurt, Germany.

Standen’s time in the MFAA was not without controversy. On November 7, 1945, the U.S. Army moved 202 German-owned paintings from the Wiesbaden Central Collection Point to the National Gallery of Art in Washington, D.C. Thirty-two members of the MFAA signed a five-paragraph letter, called the Wiesbaden Manifesto, against this decision. The manifesto read,

“Since the beginning of United States participation in the war, it has been the declared policy of the Allied Forces, so far as military necessity would permit, to protect and preserve from deterioration consequent upon the processes of war, all monuments, documents or other objects of historic, artistic, cultural or archaeological value. The war is at an end, and no doctrine of ‘military necessity’ can now be invoked for the further protection of the objects to be moved, for the reason that depots and personnel, both fully competent for their protection, have been inaugurated and are functioning.”

Standen was the only female officer to sign the Wiesbaden Manifesto, having just been promoted to officer in charge of the Wiesbaden Central Collection Point. Three years after the paintings were moved to the National Gallery of Art, all 202 paintings were returned to Germany. Standen stayed at Wiesbaden until 1947. During her career there, she was promoted to captain and her responsibilities included researching thousands of pieces of art in an effort to return them to their original owners. For her time in the MFAA, Standen was awarded the Bronze Star. She was the only female member of the MFAA to earn this award.

In 1947, Standen left the Army and began her civilian career in the museum field. In 1949, she accepted a position as an assistant curator in the textile research room at the Metropolitan Museum of Art in New York City. She was soon named the curator of textiles, which she held until her retirement in 1970. During her retirement, she continued to contribute to the museum community by researching and publishing articles on textiles. Standen stayed on as a consultant for the Metropolitan Museum during her retirement. In 1985, for Standen’s 80th birthday, colleagues from around the world gathered to celebrate her life of service during the general assembly of the Centre International d’Etudes des Textiles Anciens at the Deutsches Textilmuseum in Krefeld, Germany. In 1988, she was awarded the lifetime achievement award from the Women’s Caucus for Art. Standen passed away on July 19, 1998, in New York City. She is remembered for her lifelong love of art. Her papers and diaries are held at the National Gallery of Art.