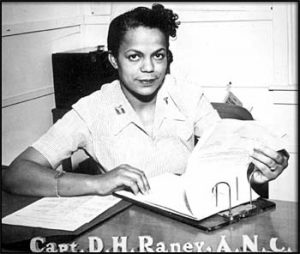 Born in Suffolk, Virginia to George and Willie Raney on January 10, 1912, Della Raney was the fourth of 12 children. She graduated from the Lincoln Hospital Nursing School in Durham, North Carolina in 1937. After graduating, Raney stayed at Lincoln Hospital and worked as an operating room supervisor.

When the United States entered World War II, Raney applied to the Army Nurse Corps. Her first application was denied based on her race. Not deterred by the rejection, Raney continued to apply. An Army Nurse Corp candidate needed to be a member of the American Red Cross, a graduate of a nursing school, a registered professional nurse, and a member of a national nursing organization. Raney wrote about her fight to join the military later in life: ”When I entered nursing more than forty years ago, it was serious business with me. It was a commitment to give my life for a cause—that of caring for those who were ill… It was this strong desire to elevate my profession that led me to volunteer for military service in 1940 with the U.S. Army Nurse Corps. Getting accepted by the Red Cross was difficult for graduates of black schools of nursing in the south, but I persisted in overcoming this barrier to the point of writing Miss Mary Beard, who at that time was director of nursing for the American Red Cross, telling her of my desire to serve my country and practice my profession. Miss Beard replied with my membership card, certificate and pin.” After her acceptance into the American Red Cross, Raney now met all the qualifications to join the Army Nurse Corps. In April 1941, Raney became the first African American accepted to the Army Nurse Corps, earning a commission as a 2nd lieutenant. Due to segregation in the U.S. Armed Forces, Raney and her fellow Black nurses were only allowed to care for Black servicemen. She and 23 other Black nurses were sent to Fort Bragg, North Carolina.

While at Fort Bragg, Raney took the chief nurse exam. She passed and was promoted to 1st lieutenant. Following her promotion, Raney transferred to Tuskegee Army Air Field (now Sharpe Field) in Alabama where she became the first African American in the Army Nurse Corps. She later became chief nurse at Fort Huachuca, Arizona, home to the 92d and 93rd Infantry Divisions, as well as the 2nd Cavalry Division. Known as the “Buffalo Soldiers,” these divisions were made up of entirely African American Soldiers. Raney moved through the ranks quickly, promoted to captain in 1945 and major in 1946. After World War II, Raney served at various Army hospitals across the country and went overseas with the occupation force in Japan. Once Raney returned, she became Director of Nursing for the base hospital at Camp Beale, California (now Beale Air Force Base).

Raney retired in 1978 as major. That same year, the Tuskegee Airmen honored Raney “for her achievements that personified the Tuskegee Spirit.” Raney died in November 1987 and is buried in Arlington National Cemetery under her married name, Della Raney Jackson. In 2012, the Tuskegee Airmen Scholarship Fund and the National Black Nurses Association created a $2,000 scholarship in Raney’s name.

“Who We Are.” National Black Nurses Association. Accessed January 29, 2021. https://www.nbna.org/who.