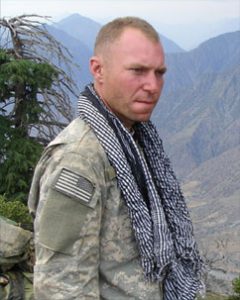 Sgt. 1st Class Jared C. Monti received the highest honor a Soldier can earn: the Medal of Honor. He was awarded the Medal of Honor in 2009 for his courageous efforts while on deployment in Afghanistan. Monti is also a recipient of the Bronze Star, the Purple Heart, and the Army Commendation Medal.

Born in September 1975, Jared Christopher Monti grew up in Massachusetts with his brother and sister. He was adventurous, constantly seeking out a thrill. During his junior year in high school, Monti enlisted in the National Guard under the Delayed Entry Program. Eager to get started, he attended basic training between his junior and senior years. He continued with training as a paratrooper in the 82nd Airborne Division. After graduating high school in 1994, Monti became an active duty service member.

In the Army, Monti worked as a fire support specialist, supporting intelligence and targeting in field artillery units. In 1998, he participated in additional training in England, earning his British Parachutist Badge with Wings. His first deployment was to Kosovo in 1999, where his view of the world changed forever. Haunted by the sight of adults throwing garbage at Muslim children, Monti began driving them to school to keep them safe. His second tour was in Afghanistan from 2003 to 2004. A series of injuries from parachute jumps made him eligible for a medical discharge, but Monti reenlisted to accompany his unit to Afghanistan yet again in 2006. He deployed in February of that year as part of Task Force Spartan.

On June 3, 2006, Monti and his 16-man team were gathering intelligence in Nuristan Province, Afghanistan. Their position was inadvertently revealed while receiving supplies, and they came under fire from 50 enemy combatants. While engaging in a gun battle, Monti realized one of his Soldiers, Pfc. Brian Bradbury, was lying wounded in the open. With “complete disregard for his own safety,” Monti twice attempted to leave cover to help Bradbury, having to fall back each time due to the enemy fire. Staff Sgt. Chris Cunningham offered to attempt his own rescue, but remembers Monti responding, “That’s my guy. I’m going to get him.” On his third attempt, however, he was struck. Tragically, neither Monti nor Bradbury survived. Monti was 30 years old.

Monti is buried at the Massachusetts National Cemetery. Friends and family remember him not as a Soldier but as a humble and giving man. Monti was known to offer up his leave to others so they could visit loved ones on holidays. Another time, he gave away a brand new dining room table to a fellow Soldier’s family in need. His father, Paul Monti, called him a humanitarian. After his son’s death, Paul discovered his son’s Bronze Star, five Army Commendation Medals, and four Army Achievement medals that he had not shared with his family.

Monti and his father are the inspiration for Lee Brice’s hit “I Drive Your Truck.” In 2011, songwriter Connie Harrington heard an NPR feature in which Monti’s father reminscienced about his son and the truck he drove to remember him. Inspired by the story, Harrington helped write the song, which was released in 2012. Country singer Lee Brice invited the Monti family to celebrate the song’s success in Nashville, Tennessee upon its release. In September 2009, President Barack Obama posthumously awarded the Medal of Honor to Staff Sgt. Monti. Monti was also posthumously promoted to sergeant first class. At the Medal of Honor ceremony, 120 family members and friends listened to President Obama honor Monti, saying: “Compassion. Perseverance. Strength. A love for his fellow soldiers. Those are the values that defined Jared Monti’s life—and the values he displayed in the actions [on June 3].”