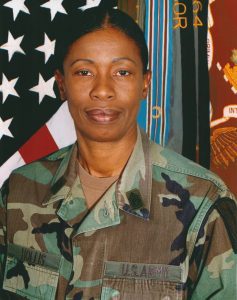 Even though she would never describe herself as such, Command Sgt. Maj. Evelyn Hollis is a history maker. Hollis did not always want to join the Army but a discussion with her mother encouraged her to enlist. This decision led her to become the first female command sergeant major of a combat arms unit. Her service continues to open doors for women in the Army even today.

Evelyn Hollis was born in Tuskegee, Alabama, and grew up in a changing world. While living in Youngstown, Ohio, in 1974, Hollis and her mother, Evelyn Louise Hollis, went for a walk around their neighborhood where they noticed an Army recruiting facility. Her mother mentioned that she had wanted to join the Army as a young girl. That conversation stuck with the younger Hollis. When she enlisted in the Army in 1979, her mother dropped her off at the recruitment center at Fort Leonard Wood, Missouri. Looking back on that moment, Hollis remembered, “She walked me into the recruiting station and I enlisted that day. After Basic and Advanced Individual Training, I thought, ‘I’m staying in the Army forever.’”

The late 20th century was a time of change for women in the Army. The Women’s Army Corps (WAC) disbanded in 1978 and women became part of the Regular Army. The elimination of the WAC allowed women to continue dismantling gender barriers during various conflicts. In 1976, the United States Military Academies accepted their first class of women cadets. Four years later, 62 women became the first female cadets to graduate from the U.S. Military Academy at West Point. In 1983, Operation Urgent Fury in Grenada changed the landscape for women in combat. Initially, four female military police were sent with their unit to Grenada. However, due to concerns about women in combat zones, they were ordered to immediately return to Fort Bragg, North Carolina. Within days, the women were reattached to their unit and sent back to Grenada. The Army then sent one hundred additional women to take part in this mission. In 1994, the “Direct Ground Combat Definition and Assignment Rule” allowed women to join any unit that they qualified for, but the rule had its restrictions: Women were not allowed in any role where they might directly engage the enemy in combat.

After 28 years of service, Hollis retired from the Army in 2007. She received the Bronze Star for her service in Operations Enduring Freedom and Iraqi Freedom. Inducted into the Army Women’s Foundation Hall of Fame in 2018, Hollis said “I do truly feel honored. It just seems so unbelievable.” Her humility shone through as she continued, “I don’t feel that special because I think we were all doing great things for the world, for the country…I’m just trying to be the best that I can be.”

Hollis remains active in the Army community. She lives in Texas with her husband, retired Staff Sgt. Terrence S. Wright. Hollis holds a dual Master’s in Human Resource Development and Management as well as a Doctorate in Management. She is currently an educator at the NCO Leadership Center for Excellence, Sergeant Major Course in Fort Bliss, Texas. In 2019, she received the Training and Doctrine Command Educator of the Year award. In her course, she encourages her students to “be a leader of character where your qualities and behaviors distinguish you as a noncommissioned officer and professional. Education is important, open your perspective to greater possibilities. Appreciate what the people in your organization bring to the table, empower them.”