Virtual Field Trips connect students to the Museum all without leaving their desks.

During these lessons, students engage in the Army’s history through artifacts, primary sources, and Soldiers’ Stories.

The Road to Revolution: The French and Indian War

Before the American Revolution, a different conflict divided the colonies and set the stage for tension between the colonies and Great Britain. Originally a land struggle between European powers, the French and Indian War provoked resentment toward Great Britain. In this virtual field trip, visitors will investigate the long-reaching effects of the French and Indian War in order to better understand its powerful relationship to the Revolutionary War.
Learn More

The Corps of Discovery was the Army’s first diplomatic mission. Meriwether Lewis and William Clark received orders from President Thomas Jefferson to explore the newly acquired Louisiana Territory and find a water passageway to the Pacific Ocean. Discover the mission’s lasting impacts and consequences for the Army, the nation, and the American Indians who inhabited the land.
Learn More

“A Long and Painful Journey: The U.S. Army and the Trail of Tears”

In May 1838, the U.S. Army deployed to enforce the Treaty of New Echota. General Winfield Scott, along with fellow U.S. Army Soldiers, were dispatched to Alabama, Georgia, North Carolina, and Tennessee. Their mission was to relocate the Cherokee to embarkation centers and oversee the journey to Oklahoma. The forced removal of the Cherokee was one of many conducted by the U.S. Army and was a consequence of the Indian Removal Act. These removals in the southeastern U.S. became known as the Trail of Tears.

Examine how Soldiers fulfilled their obligation to carry out the terms of the Treaty of New Echota. We will also identify how the implementation of the Indian Removal Act impacted both Soldiers and Native tribes. Finally, you will better understand how the effects of this policy can still be felt today.

The Civil War consumed the United States from 1861 to 1865. Tens of thousands of Soldiers endured hardships and challenges to carry out the Army’s military mission to preserve the Union. The items Soldiers carried into the field were invaluable to performing their duty and executing the Army’s mission. Join a Museum educator to explore the gear, weapons, and personal items that made up a Civil War Soldier’s Load.
Learn More

Healthy Soldiers are essential for the U.S. Army to accomplish its mission. The food Soldiers eat is one way to keep a strong fighting force. Explore how the U.S. Army supplied its Soldiers during the Civil War. Learn how Soldiers supplemented their rations and, for many, learned to cook for the visit time.
Learn More

Beyond the Civil War: Buffalo Soldiers on the American Frontier and Overseas, 1866-1916

On July 28, 1866, a Congressional Act create six new regiments of all-Black enlisted men who would become known as the “Buffalo Soldiers.” These Soldiers played a decisive role in the U.S. Army on the western frontier and overseas operations. In this Virtual Field Trip, examine the commitment, challenges, and sacrifices of Buffalo Soldiers immediately following the Civil War and continuing through the Spanish American War.
Learn More

“Like Angels from Heaven”: U.S. Army Nurses and the War with Spain 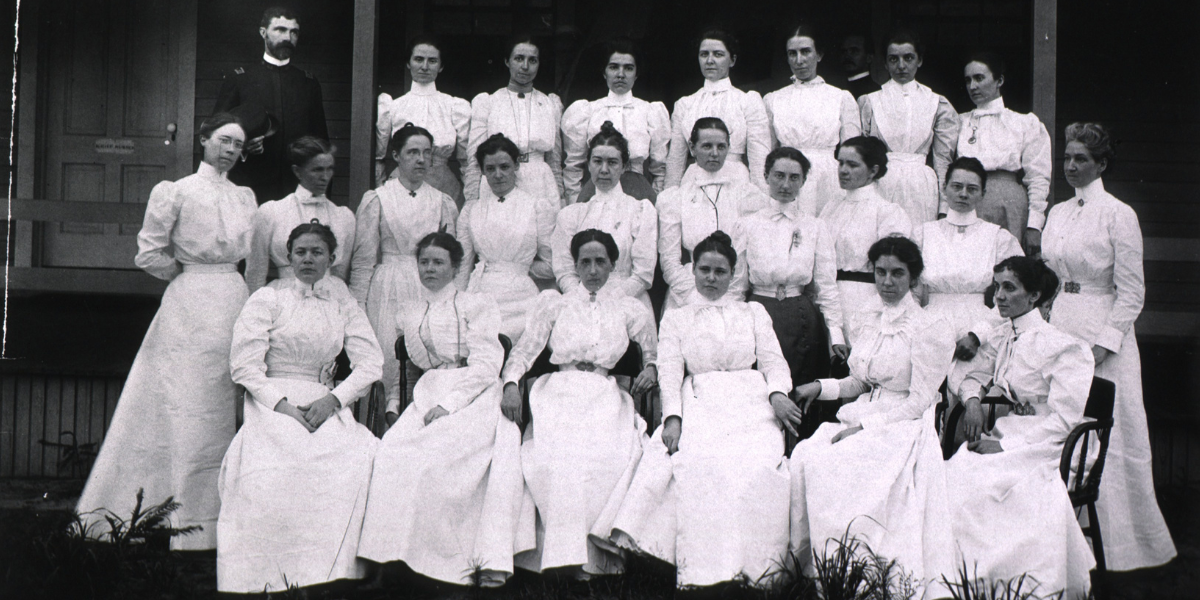 In 1898, the United States declared war on Spain. In a short time, the U.S. Army grew from 28,000 Soldiers to over 300,000 men and recruited thousands of trained female nurses to provide medical support. The selfless service of these nurses forced the U.S. Army to acknowledge the women’s contributions. Three years later, the Nurses Corps was established as a permanent part of the U.S. Army. Learn how the commitment, challenges, and sacrifices of U.S. Army Nurses created new professional opportunities for women both in the Army and civilian medical facilities.

“We Return Fighting”: The Harlem Hellfighters in World War I

On December 27, 1918, the all-Black 369th Infantry Regiment docked in Brest, France. In the 191 days the men spent on the front lines no ground was lost and no man was captured. Their actions earned them the nickname “Hellfighters.” Explore the commitment, challenges, and bravery of the Harlem Hellfighters. Learn how their actions, along with the thousands of other Black World War I veterans, contributed to the Allied victory. Examine the legacy of their service and its impact on the civil rights movement.

During World War I, over 200 women served the American Expeditionary Forces as telephone operators connecting calls between the front line and higher headquarters. The women, nicknamed the “Hello Girls,” worked tirelessly, under at times combat conditions as the first women to actively support combat operations. Learn more about how these female telephone operators were recruited for specific skills and how their contributions were critical to effective U.S. Army wartime communications.
Learn More

Defining “American”: Native American Soldiers in World War I and the Path to Citizenship

During World War I, nearly 12,000 indigenous Soldiers served in the armed forces with distinction. Their actions to protect the nation focused attention on disparities among indigenous Americans and paved the way for all indigenous people to enjoy the promise of American citizenship. In this virtual field trip, explore the commitment, challenges, and bravery of Native American Soldiers during World War I. Learn how their actions led to citizenship for all native people and helped lay the groundwork for voting rights.
Learn More

Making a Way Out of No Way: The African American Soldier Experience in World War II

Generations of African Americans have served their country, many serving in segregated units and not always given the respect and honor due to them. Although African Americans fought with distinction in World War II, they returned home to a segregated America. In 1948, President Harry Truman issued Executive Order 9981, which called for equal opportunity for all members of the Armed Forces. The segregated Army became a thing of the past and the segregation of American society began to crumble. Explore the commitment, challenges, and bravery of African American Soldiers serving during World War II.
Learn More

Army airborne units were developed to support the concept of vertical envelopment, or the ability to strike an enemy from behind when ground forces could not go around prepared defenses. Explore how the U.S. Army developed new technology, training, and strategies to overcome challenges and accomplish the mission. Learn how Army airborne troops contributed to Allied turning points during World War II.
Learn More

Learn about the courageous men and women of Japanese ancestry from Hawaii and the mainland United States who served in the U.S. Army during World War II, while some of their families were placed in War Relocation Authority Confinement Sites.
Learn More

Over Here, Over There: The United States Service Organizations (USO) and the U.S. Army

Laughter, celebrities, and frivolity are the sounds and images most closely associated with the USO. These professional-quality variety shows featured popular comedians, vocalists, and actors in some of World War II’s most uncertain battlefields. The shows brought a brief respite from the uncertainty and stress associated with wartime service. Learn how the Army values of selfless service and duty were channeled by civilians to support and uplift Soldiers during one of the darkest times in American history.
Learn More

The Accomplishment of the ENIAC and the Women Computing Pioneers

Winning World War II required an all-out effort. Thousands of women on the home front answered their country’s call to join the military, industry, and the civil service. In 1943, the U.S. Army recruited seven women mathematicians to set up and operate the Army’s newest top secret weapon: the Electronic Numerical Integrator and Computer (ENIAC). These unsung heroes wired the electrical connections that enabled the world’s first electronic, digital computer to complete 300 calculations per second. In doing so, they built a framework for the field of computer programming. Discover how female “computers” solved complex problems, contributing to Army innovation during World War II.
Learn More

The Question of “What if?”: The U.S. Army During the Cold War

During World War II, the Soviet Union and the United States worked together to fight a common enemy; and after the war that relationship fell apart. Trust between the former allies broke down and fear took hold in its place. This mutual mistrust lead the two countries to confront the looming question of “what if?” That question would color the relationship between the two for the next 50 years. As a result, the Army developed new technology, equipment, and training to better protect Americans from the possibilities and threats posed by the “what if?” In this virtual field trip, you will learn how Soldiers worked together to keep the “what if?” from becoming a reality during the Cold War.
Learn More

The Art of Soldiering: Soldier Art and Culture in Vietnam

The U.S. Army has its own culture based on the Army values, esprit de corps and the mission. While each Soldier’s experience is unique to their service, culture binds them together. During the Vietnam War, Soldier culture was formed by the clothing Soldiers wore, the food they ate, the entertainment they consumed and their shared experiences.

Through an examination of artifacts, film, and primary sources, gain additional insight into the commitments and sacrifices of Vietnam-era Soldiers and explore how these items contributed to a Soldier culture unique to this conflict.