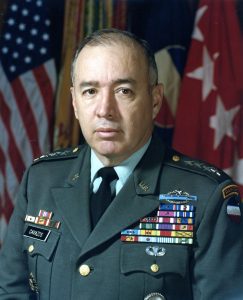 There are few individuals who are the right person, in the right place, and at the right time. General Richard E. Cavazos was one of those people. From growing up on a cattle ranch, sustaining a career-ending football injury in college, and facing enemy forces in both the Korean and Vietnam Wars, Cavazos was able to learn from his life experiences and use them to become one of the Army’s finest Soldiers. He served as the first four-star general of Hispanic descent in Army history. Cavazos’s actions, guidance, and loyalty to the Soldiers he served with led retired Lt. Gen. Daniel P. Bolger to declare him the epitome of “Army done right.”

Richard Edward Cavazos was born on January 31, 1929, in Kingsville, Texas. Born to Mexican American parents, Cavazos spent his childhood following in the footsteps of his World War I veteran-turned-ranch foreman father. Despite growing up in an era of intense racism, Cavazos’ parents managed to put all of their children through college, an unheard of accomplishment for most Mexican American families at that time. Cavazos attended Texas Technological College (now Texas Tech University) on a football scholarship until he broke his leg his sophomore year. After his recovery, Cavazos continued his education through the school’s Reserve Officers’ Training Corps program and graduated with distinction. In 1951, he was commissioned into the Army and completed basic officer training at Fort Benning, Georgia.

Upon completing his training, 2nd Lt. Cavazos deployed to Korea where he was selected as the platoon leader of E Company, 2nd Battalion, 65th Infantry Regiment. Known as The Borinqueneers, the 65th Infantry had been in Korea since the start of the War and was primarily made up of Soldiers from Puerto Rico, many of whom only spoke Spanish. Cavazos, who was raised bilingual, was a welcome addition after a series of commanders who spoke no Spanish, which resulted in confusion and chaos during battles.

Throughout his time in the Army, Cavazos believed in the moral ascendancy of leaders; the belief that troops needed to have complete trust and faith in their commanding officer to achieve victory. This belief dictated his actions throughout his career, even early on in Korea. Evidence of his determination to achieve moral ascendancy was clear in February 1953. Cavazos, at first leading a few of his men and then going on alone once under attack by enemy fire, captured a wounded enemy soldier who had been left behind after an earlier skirmish. Cavazos was awarded a Silver Star for his bravery.

In June 1953, Cavazos’ leadership abilities were once again on display. He led his men on an assault of the enemy-held Hill 412 as part of a maneuver to cover Outpost Harry, an important defensive position near the hill. They soon came under heavy enemy artillery fire, which resulted in many American casualties. After successfully defending Outpost Harry through three intense hours of fighting, Cavazos received the order to return to friendly lines. Refusing to leave fallen and wounded American Soldiers behind, he repeatedly went back to rescue missing men, despite being wounded himself. His actions led to the Army awarding him the Distinguished Service Cross.

Cavazos rotated back to the United States in the fall of 1953 where he was stationed at Fort Hood, Texas. Eventually rising to the rank of lieutenant colonel, he was sent to Vietnam in 1967. There he became the commander of the 1st Battalion, 18th Infantry Regiment. His style of leadership was immediately noticed by his troops. “He was an atypical army officer in Vietnam,” remembered Bill Fee, who served under him. “Most battalion commanders stood in the rear or in a helicopter above to direct the battle… [He] had nothing to do with that. He fought on the ground with his troops during battle…he was on the ground with us as we were facing the North Vietnamese Army.”

Another testament to Cavazos’ loyalty to his men and their safety was when he organized a counterattack against enemy forces near Loc Ninh. He once again disregarded his personal safety and led an assault on the enemy’s hillside position, often exposing himself to hostile fire while moving among his troops. He directed such a barrage of artillery fire towards Viet Cong insurgents that the enemy soon fled. This counterattack led him to be awarded a second Distinguished Service Cross.

While Cavazos was certainly a fearless Soldier, he is also remembered as a beloved mentor and teacher. His determination to share what he had learned throughout his career made him influential in the development of the Army’s Battle Command Training Program for high-ranking officers (now Mission Command Training Program). General Colin Powell credited Cavazos for helping him after a less than stellar performance evaluation had Powell reconsidering his Army career. But it was the countless Hispanic soldiers who followed in his footsteps who credit Cavazos for paving the way for their careers. “I told him what he meant to us poor Hispanic kids,” recalled Maj. Gen. Alfred Valenzuela , “his impact as a mentor is probably the greatest impact our army had…we all looked up to him as an American soldier, a Hispanic soldier. He was the guy we wanted to be. If we couldn’t be him, we wanted to be near him and serve with him.”

Richard E. Cavazos retired from the Army in 1984 after 33 years of service. Before his retirement, he made military history when the Army appointed him as the first Hispanic brigadier general in 1976 and then four-star general in 1982. He passed away in 2017 at the age of 88 due to complications from Alzheimer’s. Upon the news of his death, countless Soldiers paid tribute to the man who helped shape today’s Army. “He was such a good soldier,” stated retired Gen. Gordon Sullivan, “…he liked combat soldiers. He was courageous, and they knew it, and they knew he couldn’t ask them to do anything he wouldn’t do with them…he was born that way.”