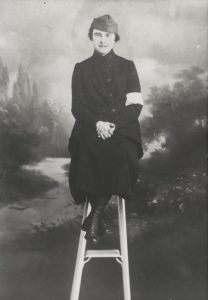 Prior to the 20th century, women had only served as volunteers to the Army but never in an official capacity. The Army Signal Corps was one of the first departments to accept women as contractors. Known as the Hello Girls, telephone operators like Cordelia Dupuis went to France to assist the American Expeditionary Force. The Hello Girls played an important role not only in World War I, but in paving the way for future women in the Army.

Cordelia Elizabeth Dupuis was born on October 14, 1896, in Thorne, North Dakota. As the child of Canadian-Americans, Dupuis grew up speaking both English and French. She took a position as a telephone switchboard operator around the age of 17 or 18. In the early 20th century, a switchboard and operator had to physically connect calls. Operators handled 250 to 350 calls an hour by physically plugging in the caller’s line into the receiver’s line and disconnecting the lines once the call was complete. By the time World War I broke out, telephones had become standard in American business and were growing in popularity with American citizens. While male-dominated in the beginning, women began to replace men as operators in the private sector. Telephone companies switched to female operators since they were cheaper to hire and considered, “more patient, docile, and agreeable than boys.” By 1917, 99% of the 140,000 telephone operators in the United States were women.

In 1917, the chief signal officer of the Signal Corps pointed out “the importance of inter-communication in warfare cannot well be exaggerated. . . . Unity of command . . . can only reach its full value when the most perfect system of inter-communication is established and maintained.” Telephones were more reliable than previous modes of communication such as the telegraph. As the United States prepared to enter World War I, the Signal Corps began building better communication infrastructure including telephones. But, they next needed reliable operators to maintain these connections. Initially, men were stationed as operators but as the war went on, more men were needed on the front lines. On the home front, women were already working as operators so it made sense to bring them to Europe so more men would be available to fight. On November 8, 1917, General John Pershing sent a request to Washington, D.C. for “women telephone operators speaking English and French equally well.”

On February 2, 1918, at 22 years of age, Dupuis became a civilian contractor in the 1st Unit of the Signal Corps. While the Army and the general public were still unsure of women’s potential for military service, Dupuis and 223 other women, fluent in both French and English became Army telephone operators. She attended training in Trenton, New Jersey. On March 6, 1918, Dupuis and the rest of her unit left New York for France. The operators staffed high-capacity call centers that tended to be farther away from the action, but the Hello Girls soon proved their ability to handle danger. As the Germans continued bombing Paris through June 1918, the operators became prepared for anything. While staying in the Hotel Ferras in Paris, the women awoke to an air raid siren. Dupuis remembered sliding down the banisters of the stairs in their nightgowns to the air-raid shelter in the basement.

Throughout the war, the Army realized the potential in the Hello Girls and their work soon broadened to more than just connecting calls. They started receiving and translating sensitive messages on troop logistics. Some women even worked in offices where messages were passed in code, continuing to prove their importance to the war effort. Dupuis and the other Hello Girls remained in Europe after the end of the war to assist with the Treaty of Paris. She returned to North Dakota to be with her family at the end of 1919.

When Dupuis returned to the United States on Christmas Day, 1919, she was not seen as a Soldier but as a civilian under contract. According to Army regulations, only males could be Soldiers. The Hello Girls were hired as civilian employees and thus not considered veterans. This meant they did not receive any of the benefits that come with veteran status. Over the next several decades, many Hello Girls petitioned Congress for veteran privileges. Fortunately, Dupuis lived to see that change 60 years after the end of World War I. In 1978, Congress finally granted the Hello Girls veteran status and honorably discharged them from service. When Dupuis died in 1986, the Hello Girls finally had the recognition they deserved for their hard work. Today, the Hello Girls are recognized for their integral role in women’s integration into the Army.

Roster of the Men and Women Who Served in the Army or Naval Service (Including the Marine Corps) of the United States or Its Allies from the State of North Dakota in the World War, 1917-1918, Vol. 1. Bismarck: The Bismarck Tribune Company, 1931. https://babel.hathitrust.org/cgi/pt?id=uc1.$b742708&view=1up&seq=6.