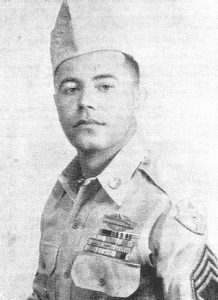 The Korean War is often regarded as a “forgotten war” by military historians. Occurring between World War II and the Vietnam War, the Cold War era conflict claimed the lives of over 36,000 Americans and hundreds of thousands of Korean civilians. In the memory of this forgotten war lies the actions of a forgotten hero. Modesto Cartagena de Jesús served in the U.S. Army during World War II and the Korean War. Despite facing segregation, Cartagena patriotically served in the Army for over 20 years. The Army awarded him the Distinguished Service Cross for his service during the Korean War and he served as an inspiration for future Puerto Rican Soldiers.

Born in the small mountain community of Cayey, Puerto Rico, Cartagena grew up in a poor family. The Great Depression in the 1930s made conditions even worse and Cartagena faced extreme poverty. After the outbreak of World War II in 1941, Cartagena enlisted in the Army and joined the 65th Infantry Regiment. Later nicknamed “The Borinqueneers” after the original inhabitants of Puerto Rico, the 65th was a segregated regiment of native Puerto Ricans commanded by white officers. Puerto Ricans have a long history of military service. When the United States acquired Puerto Rico as a result of the War with Spain, the U.S. military began governing the island. In 1917, Puerto Ricans born after 1898 were granted U.S. citizenship and many of them were drafted to serve in World War I. Prior to 1948, persons of color serving in the U.S. military were relegated to segregated units. This atmosphere of discrimination extended to Puerto Ricans on the eve of World War II.

Initially, Cartagena and the regiment deployed to Panama in 1943 to guard the Panama Canal from enemy attack. In April 1944, the 65th deployed to North Africa and in September of that year, they headed to Italy where the regiment saw combat for the first time. They fought in several campaigns in Europe before returning to Puerto Rico after the end of the war. Cartagena was awarded a bronze star for his service and was honorably discharged in October 1945.

Cartagena reenlisted in the Army upon the outbreak of the Korean War in June 1950. Given the rank of sergeant, Cartagena rejoined the 65th. Though President Harry S. Truman had outlawed segregation in the armed forces in 1948, the 65th did not integrate until 1953. They were assigned to the 3d Infantry Division and landed at the North Korean port city of Wonsan. They immediately engaged retreating North Korean forces and joined a general pursuit of the enemy to the Yalu River on the border with China. As United Nations forces pushed towards China’s border in November 1950, China entered the war as an ally of North Korea. Taken by surprise, American and United Nations forces were pushed back. The 65th valiantly fought a rearguard action that allowed U.S. Marine forces to withdraw from the infamous Chosin Reservoir. For this action, they were awarded the Navy Unit Commendation.

Over the next several months, the 65th fought the enemy across the Korean peninsula. In April 1951, elements of the 65th participated in a series of counter-offensives into enemy territory near Yonch’on, North Korea. One of the objectives included taking Hill 206. As Cartagena and his company approached the hill, enemy machine gun emplacements opened fire. With his fellow Soldiers pinned down, Cartagena charged the enemy positions by himself. Under heavy fire, he destroyed one enemy emplacement with a grenade before silencing the other with his firearm. He continued to assault enemy positions by himself until wounded by enemy fire and grenades. His bravery saved the lives of his fellow Soldiers as many of them were wounded by the enemy before he attacked. In all, Cartagena destroyed five enemy positions, killing over 40 enemy soldiers.

Cartagena spent over 60 days in the hospital recovering from his wounds. For his actions on Hill 206, he was awarded the Distinguished Service Cross. He returned to duty and served until he retired from the Army in 1971. He remained active and involved with the 65th Infantry for the remainder of his life. His family and friends believed that because of the Army’s segregation policies at the time, he was denied the Medal of Honor for his actions on Hill 206. They advocated for his Distinguished Service Cross to be upgraded. Cartagena died of a heart attack on March 2, 2010 after battling stomach cancer. He is buried in Puerto Rico National Cemetery and his family is still advocating for him to be posthumously awarded the Medal of Honor. The service of Cartagena, along with that of the Soldiers of the 65th, is widely celebrated by Puerto Ricans as a testament to their dedication to serving the United States.

Center for Puerto Rican Studies. “The Borinqueneers: The Forgotten Heroes of a Forgotten War.” Centro Voice E-Magazine. Accessed May 28, 2021. https://centropr.hunter.cuny.edu/centrovoices/chronicles/borinqueneers-forgotten-heroes-forgotten-war.