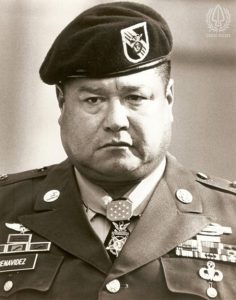 Nestled inside the Soldier’s Creed, which every member of the modern Army learns in basic training, is the Warrior Ethos: “I will always place the mission first. I will never accept defeat. I will never quit. I will never leave a fallen comrade.” If the Army had created a personification of the Warrior Ethos, it would have been Roy Benavidez. Benavidez personified mental and physical toughness throughout his life, and he epitomized the Warrior Ethos on May 2, 1968, near Loc Ninh, Cambodia, where he earned the Medal of Honor.

Born on August 5, 1935, to poor sharecroppers in Cuero, Texas, Roy Perez Benavidez lost both of his parents by the age of seven and was raised by his aunt and uncle. At the age of 15, he dropped out of school to help support his family, picking sugar beets and cotton. As a high school dropout with few prospects, Benavidez joined the Texas National Guard at 17 during the Korean War. Two years later, he joined the active duty infantry and completed rotations in South Korea and Germany before attending Military Police (MP) training in 1959.

After graduating from the MP course, Benavidez was assigned to the 82d Airborne Division and deployed to Vietnam as an advisor by 1965. On a patrol with a South Vietnamese Army Regiment, Benavidez stepped on a land mine and “woke up in the Philippine Islands, in Clark Air Force Base,” paralyzed from the waist down. When he arrived at Fort Sam Houston in Texas, doctors broke the worst of the news: the damage to his spine was too severe. Benavidez learned that he might never walk again, and would be medically discharged from the Army.

Roy Benavidez had other ideas. Refusing to quit and determined to return to his comrades, he began a nightly personal training routine to return to service. Every night, against medical guidance but with the encouragement of the other Soldiers in his hospital ward (many of whom were amputees), he pulled himself out of bed, over to the wall, and slowly redeveloped his legs in a nightly routine he later admitted often left him in tears. Finally, in secret except for his ward-mates, Benavidez progressed from sitting, to standing, to shuffling along the wall. When the doctors arrived months later with his final discharge paperwork, Benavidez stood up out of bed and walked; instead of sending him home, the Army fit 18 months of physical therapy into six and sent him to Fort Bragg, North Carolina.

On his return to the 82d Airborne, Benavidez could barely walk. By the end of six months, he could run ten miles with a rucksack. After completing Special Forces selection in 1967 and training as a weapons expert, Benavidez earned an assignment to 5th Special Forces Group and returned to Vietnam. Once there, Benavidez requested assignment to Detachment B-56, under the control of the Military Assistance Command Vietnam, Studies and Observation Group (MACV-SOG). In April 1968, Benavidez narrowly escaped a patrol with his life thanks to Sgt. 1st Class LeRoy Wright’s intervention. Benavidez and Wright had known each other in the 82d Airborne Division, gone through Special Forces Selection together, and found themselves reunited in Detachment B-56.

As Benavidez returned from Catholic Mass on May 2, 1968, he heard a panicked call for help over the radio. Benavidez learned that Wright was part of a 12-man team under attack (three Special Forces Soldiers and nine Vietnamese Montagnards, or Mountain Men). Surrounded by a North Vietnamese Army (NVA) Battalion, the team was outnumbered nearly one hundred to one and three helicopters had already failed to get them out. Without hesitation, Benavidez grabbed a nearby aid bag and, armed only with the combat knife on his belt, climbed into the next helicopter to help the rescue attempt.

With the helicopter unable to land, and realizing the team on the would be unable to reach them anyway, Roy Benavidez jumped into what he later described as “six hours in hell.” While running about 75 yards to the team’s position, Benavidez was shot in the leg and a hand grenade explosion struck his head and face with shrapnel. Upon reaching the team, he reorganized the remaining forces on the ground, stabilized the wounded, and armed himself with an AK-47 from one of the four dead Montangards. He then signaled the helicopters for extraction. Benavidez led the walking members of the team to the evacuation helicopters and directed another pilot to the rest of the team while firing to suppress the enemy. Benavidez was shot in the stomach and received shrapnel from another grenade in his back as the pilot of the second helicopter was killed and the helicopter (with the rest of the team) overturned.

Severely wounded and without a way out of the fight, Benavidez immediately moved to the crash site and reorganized the survivors into a defensive perimeter. He took charge of the group and radioed in bombing runs by jets and attacks by helicopter gunships to allow more helicopters to land. Despite being wounded again while administering first aid, he began once again carrying his wounded comrades onto a helicopter and ensuring that he recovered all maps, Standard Operating Instructions (SOI) cards, notes, and other classified material. On one trip, he was clubbed in the jaw by an NVA soldier and run through with a bayonet. Benavidez killed the soldier with his knife, and continued moving injured team members to the helicopter while holding in his intestines, killing two more NVA soldiers who were preparing to kill the helicopter pilot. After a final check to ensure he had left no classified material behind, barely moving and nearly blind from the blood running into his eyes after sustaining 37 wounds, Benavidez allowed himself to be pulled into the helicopter.

Six hours after he first jumped aboard the helicopter, Roy Benavidez felt himself being placed into a body bag, presumed dead. Mustering the last of his strength, unable to speak, move, or open his eyes, he spat in the doctor’s face to convey that he was still alive. After over a year in various hospitals, Roy Benavidez recovered and was awarded the Distinguished Service Cross (DSC); at the time, the Army believed there was no eyewitness to the account, a requirement at the time to award the Medal of Honor. On February 24, 1981, after finding a living eyewitness, President Ronald Reagan upgraded his DSC to a Medal of Honor.

After serving at Fort Riley, Kansas and Fort Sam Houston, and having reached the rank of master sergeant, Roy Benavidez retired in 1976. He made encouraging and guiding young Americans his priority through public speaking and mentoring, particularly pushing underprivileged children away from gangs and into military service to bring productivity and purpose. In 1983 he fought for his Vietnam War comrades one last time, successfully advocating for the continuation of disability benefits for Vietnam veterans. Roy Benavidez passed away November 29, 1998 at the age of 63 and was buried at Fort Sam Houston National Cemetery in San Antonio, Texas.