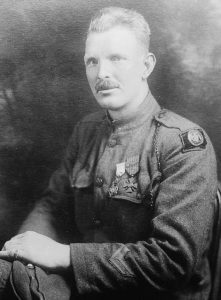 The story of Sgt. Alvin York is a celebrated chapter in Army history. Though he tried to avoid war for religious reasons, York became one of the most notable heroes of World War I for his actions in October 1918. He helped capture over 100 Germans in a mission that could have ended in total failure. Even though he was a national celebrity, York wanted his legacy to mean more and bring his experiences abroad back home. He used his fame, and the money from a movie about his life, to educate the youth in his community. York used his influence to better the lives of others, illustrating his dedication to the core Army value of selfless service.

Alvin Cullum York was born in Pall Mall, Tennessee, on December 13, 1887, into a family of farmers. He was the third of 11 children, and the oldest boy of William and Mary Brooks York. The Yorks struggled in poverty, which only worsened when York’s father died in 1911. York only had nine months of schooling but had gained a variety of skills exploring and hunting for game in the mountains of Tennessee. York became a skilled marksman and continued to work jobs around Pall Mall to support his family. The stress of supporting his family was difficult. People in the town considered him a nuisance, in part due to his tendency to lose money. York’s life changed, however, when he found faith. In 1914, York attended a meeting of the Church of Christ in Christian Union and decided to change his life. He joined the church in 1915 and adopted its strict moral code which forbade violence. His faith helped improve his life but was put to the test when he was drafted in 1917.

Due to his new religious beliefs, York did not want to fight in the war raging across Europe. By 1917 World War I was in its third year, already claiming millions of lives and leaving massive destruction across Europe. Stories of the hellish fighting in Europe reached the United States and many, including York, had heard of the horrors of the battlefield. With the United States’ entry into World War I, the government decided to use the draft to raise its fighting forces to send to Europe. Though he wanted no part in the war, York had to sign up for the draft like millions of other American men. On June 5, 1917, he received the notice he had been selected for military service. York now faced the difficult decision of choosing to fight which went against his religious beliefs, or choosing not to and being arrested.

He tried to file for an exemption as a conscientious objector, someone who opposes military service due to moral or religious beliefs. Even with a testimonial from his pastor, York’s appeal was denied three times because his church was not recognized as an official sect of Christianity. He reported to Camp Gordon, Georgia (now Fort Gordon) in the fall of 1917, where he continued to explain his predicament and avoid contradicting his beliefs. Assigned to the 328th Infantry Regiment, 82d Infantry Division, York proved himself a skilled marksman but still struggled with the order to fight. He appealed the order to his battalion commander, Maj. Edward Buxton. Instead of instantly denying him, Buxton and York spent hours talking and referencing Bible passages that supported each other’s views. York left that meeting still a Soldier and just as confused. He returned home to contemplate the issue and after days of prayer and reflection made the decision to follow orders and fight. York decided that if he still followed the right path in his soul, no matter the path God set out for him, he would be judged a good man. Though he still opposed the war, he returned to Camp Gordon to prepare for deployment to Europe.

York arrived in France on June 27, 1918, and immediately went to the front. The Army assigned his unit to the Meuse-Argonne Offensive, the largest American operation of the war. On October 8, 1918, York and his unit of 16 Soldiers were dispatched to capture the Decauville Railroad. Unfortunately, their map was in French and the detachment ended up behind enemy lines where they ran into a German unit on guard. York and his unit won a brief firefight and captured the enemy soldiers. However, the captured Germans soon discovered the Americans’ mistake and yelled out for help. Enemy machine-gun fire immediately cut down nine American Soldiers. After losing all their sergeants, York took command of the unit. The remaining men returned fire, while York took on the machine gun alone.

York used the skills he had learned hunting in the mountains of Tennessee to work his way toward the gun, slowly and calmly approaching the enemy position. But before York could reach the gun, a group of five Germans rushed his position. He defeated the attackers without getting hit and reached the machine gun nest. York eliminated the machine gun and the German commander decided to surrender instead of losing any more men. In all, his unit captured 132 German prisoners and the remainder of his squad made it back to the American line. York was immediately promoted to sergeant and soon became a national hero.

York received a number of awards for his actions including the Medal of Honor and the French Croix de Guerre. He returned home a hero with a huge celebration in New York. Hollywood executives begged for the rights to tell his story but York declined. Instead, he returned to Pall Mall to marry Gracie Williams. Though York wanted a peaceful life in rural Tennessee, he had been exposed to a much larger and industrialized world. Not only did World War I show the deadly capabilities of new technology, but it also opened the eyes of the world to what the industrial revolution had produced. York wanted to bring that new world to his hometown to help prepare the next generation for an increasingly industrial world.

In 1926 he started the York Agricultural Institute in Jamestown, 10 miles from Pall Mall, to educate the youth of his town. York stayed out of the spotlight until Hollywood screenwriters finally convinced him to make a film about his story. He wanted to tell the story of his life after the war and the work he had done at home. Despite this desire, “Sergeant York” was released in 1941, and focused on his time in France. Starring Gary Cooper, “Sergeant York” became one of the highest-grossing films in the United States during World War II.

In 1954, York suffered a cerebral hemorrhage which disabled him for the rest of his life. He lived for ten more years until he passed away in Nashville on September 2, 1964. York was buried in Pall Mall, the place he loved most. Today his legacy in combat and education still lives on. Though a war hero, York wanted to be remembered as an educator focused on helping prepare future generations for an ever changing world. The school he founded continues to educate children in Tennessee to this day.

Nelson, James C. The York Patrol: The Real Story of Alvin York and the Unsung Heroes Who Made Him World War I’s Most Famous Soldier. New York: Harper Collins Publishers, 2021.