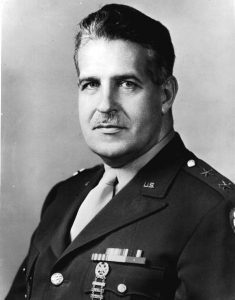 The Army-led effort to build and mass produce the atomic bomb changed history. Known as the Manhattan Project, it brought together over 100,000 people, cost more than $2.2 billion, and was spread out over 30 locations across the United States. Brig. Gen. Leslie R. Groves oversaw the project. His imposing personality, drive, and administrative knowledge of the Army ensured the project’s success.

Leslie Richard Groves Jr. was born on August 17, 1896 and learned about Army from a young age. His father Leslie Richard Groves Sr., a Presbyterian chaplain in the Army, introduced core values to his children, constantly urging them to be strong, brave, and honest. The family moved to various Army posts throughout the country. Growing up, Leslie R. Groves was mentored by then Lt. Edmund B. Gregory. Gregory taught enlisted personnel how to prepare for the entrance examination to the U.S. Military Academy at West Point and influenced Groves’ ambition to attend.

Groves’ determination to succeed is evident in his attempts to gain admission to West Point, which was very competitive. At the time, admission requirements included both a presidential nomination and a high scoring entrance exam. During his senior year of high school in 1915, he enrolled in the University of Washington in an attempt to stand out. After graduation he received a nomination from President Woodrow Wilson but did not score high enough on the West Point entrance exam. Undeterred, he enrolled in the Massachusetts Institute of Technology and retook the entrance exam in 1916, which he passed. Of his appointment Groves said, “entering West Point fulfilled my greatest ambition.” Groves excelled at West Point, graduating fourth in his class in November 1918. Following graduation, he was assigned to the U.S. Army Corps of Engineers as a 2nd lieutenant.

Groves’ early Army career helped him refine the skills and build the relationships needed for the Manhattan Project. He took part in construction projects in Hawaii, Texas, New Jersey, and Delaware. He even deployed to Nicaragua to conduct a survey for the Inter-Oceanic Nicaragua Canal. Grove attended the Command and General Staff School and the Army War College to expand his knowledge of Army leadership. He also completed two tours of duty in Washington, D.C. where he made connections among influential Army leaders, scientists, engineers, contractors, and corporations. All of this experience proved useful in the future.

With the world on the brink of the Second World War, Groves’ childhood mentor, Maj. Gen. Gregory, requested his service as special assistant for construction in 1940. The war required construction of new training facilities and barracks for thousands of new recruits. Groves excelled, working long hours and traveling across the country to oversee construction. The position required coordination with civilian contractors as well as politicians inquiring about projects in their districts. In July 1941, he was appointed supervisor of the Pentagon construction project. Once complete, the new War Department headquarters, known as the Pentagon, became the largest office building in the world. It occupies 34 acres, covers 6 million square feet of floor space, and has parking lots for over 8,000 cars. Under Groves’ direction, the project was completed in 16 months.

At the same time the Army was expanding its infrastructure, it was also developing new weapons. In August 1939, physicists had successfully split the nucleus of an atom and were applying that principle to other areas. One possible application involved using uranium to create a nuclear reaction that could be harnessed into a powerful new weapon. Concerned about these possibilities, physicists Leo Szilard and Albert Einstein sent President Franklin Roosevelt a letter summarizing the danger of this technology in the hands of German scientists. They wrote, “this new phenomenon would also lead to the construction of bombs, and it is conceivable….that extremely powerful bombs of a new type may thus be constructed.” Influenced by the letter, Roosevelt formed the Advisory Committee on Uranium in 1939 to explore how uranium might be used to create weapons. Following the surprise Japanese attack on Pearl Harbor, Army Corps of Engineers took over the project, code named the Manhattan Project.

To lead the project, the Army needed someone who got results. Groves’ work on the Pentagon earned him a reputation as someone driven to succeed. In September, 1942, he was appointed to head the project, responsible for scientific development, infrastructure construction, and planning for the bomb’s eventual use. He immediately went to work. In his first few weeks, Groves obtained a high priority status from the War Production Board, arranged the purchase of uranium ore, and selected a site at Oak Ridge, Tennessee for construction of uranium processing plants.

Groves’ relentless drive to complete the project gave it momentum. Groves worked six days a week, 12 to 14 hours a day. He tirelessly traveled between sites in New York, Tennessee, New Mexico, and Washington state. As Col. Kenneth D. Nichols, district engineer of the Manhattan Engineer District described him, “He abounds with energy and expects everyone to work as hard, or even harder, than he does.”

On July 16, 1945, under his direction, the Manhattan Project completed the first successful detonation of the atom bomb, known as the Trinity test. Less than a month later, the U.S. deployed two atomic bombs on Hiroshima and Nagasaki in Japan. The war against Japan ended a short time later on August 14, 1945. Groves was awarded a Distinguished Service Medal for his efforts on behalf of the Manhattan Project as well the Legion of Merit for the Pentagon construction. President Harry Truman also recommended he receive the permanent rank of major general.

Groves’ determination to succeed at all costs ultimately limited his Army career. Those who worked with him described him as demanding, critical, and abrasive. Following the war, the Manhattan Project disbanded and Groves was appointed to the Armed Forces Special Weapons Project, a new military agency created to oversee the maintenance, storage, handling, and testing of nuclear weapons (now the Defense Threat Reduction Agency). There, his confrontational behavior led to a meeting with Chief of Staff General Dwight D. Eisenhower. At the meeting, Eisenhower made it clear that Groves’ behavior would prevent him from ever becoming Chief of Engineers. Faced with a stagnating career, Groves retired in February 1948. On his retirement, Congress authorized Groves’ promotion to permanent major general and honorary lieutenant general on the retired list.

After his Army retirement, Groves served as vice president of research and development at Remington Rand until 1961. In retirement he published a book about the Manhattan Project and in February 1970 was awarded the Atomic Pioneer Award by President Richard M. Nixon. He suffered a heart attack on July 13, 1970 and died at the Walter Reed Army Medical Center. He is buried at the Arlington National Cemetery.

The Manhattan Project’s successful development, deployment, and mass production of nuclear weapons changed the world. The emergence of nuclear weapons created new superpowers, alliances, and enemies and would color American foreign policy for the next fifty years. The project’s success is in large part attributed to Groves, whose drive and determination pushed the project to completion.

Goldberg, Alfred. The Pentagon: The First Fifty Years. Washington, D.C.: Office of the Secretary of Defense, 1992.

Groves, Leslie R. Now It Can Be Told: The Story of the Manhattan Project. France: Hachette, 1962.

Norris, Robert S. Racing for the Bomb: The True Story of General Leslie R. Groves, the Man Behind the Birth of the Atomic Age. New York: Skyhorse, 2014.