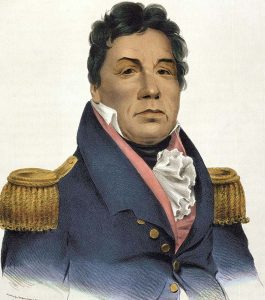 Chief of all chiefs, diplomat, warrior, and spiritual leader are some of the terms used to describe Chief Pushmataha of the Choctaw Nation. From his youth to his final days, he proved himself a great leader and negotiator. At a time when settlers pushed farther west, threatening Native American lands, Pushmataha became an important bridge between the Choctaw people and the United States government. He led his tribe in conflicts with other nations and in service for the U.S. Army, negotiating multiple treaties to try and protect his people.

Very little is known about Pushmataha’s early life. Born around 1764, in present-day Mississippi, his parents died when he was young. He spoke very little of his early life and parents. Instead, he said, “Pushmataha has no ancestors; the sun was his father, the moon, his mother. A mighty storm swept the earth; midst the roar of thunder, the lightning split a mighty oak, and Pushmataha stepped forth a full-fledged warrior.” He showed his abilities as a warrior from a very young age, excelled in battles against neighboring tribes and during hunts, and became a leader at an early age. His given name reflected his abilities. His full name was “Apushamatahahubi,” which means a messenger of death, literally, one whose rifle, tomahawk, or bow is fatal in war or hunting.

Pushmataha’s prowess in battle made him a great leader, as did his skill as a negotiator. He lived in the Six Towns Division of the Choctaw Confederacy, near the basins of the Leaf and Chickasawhay Rivers in Alabama. He became their diplomatic leader in his twenties. Around 1800, he began serving as a leading chief and played a significant role in negotiations with other Native American nations and the U.S. government. He developed a reputation for his speaking abilities and negotiation tactics, showing a firm grasp of English and other Native languages and a logical mind that helped overcome negotiation barriers. He took part in a formal treaty at the Fort Confederation meeting in 1802 and played a vital role in all negotiations between the Choctaw and the United States, like the Treaty of Mount Dexter in 1805 and the Treaty of Fort St. Stephens in 1816. However, he frequently disagreed with Tecumseh, a Shawnee chief. In 1811, Tecumseh tried to bring the Choctaw Nation into his confederacy to fight against the United States’ seizure of Native American hunting land. Tecumseh made a passionate appeal and almost won over the Choctaw. However, Pushmataha delivered a memorable reply, calling Tecumseh a tyrant and appealing to the Choctaw’s desire for peace. After hearing from Pushmataha, only 30 Choctaw warriors joined Tecumseh.

The refusal to join Tecumseh’s confederacy proved critical at the start of the War of 1812. On June 18, 1812, Tecumseh’s confederacy and several other Native nations joined the British to fight against the United States. The Choctaw remained neutral until 1813, when the Red Stick Creeks attacked Fort Mims, Alabama Territory, killing 500 Americans. Maj. Gen. Andrew Jackson, leader of the United States’ southern forces at the time, asked Pushmataha to help counterattack. He agreed to help and received the rank of captain. His first order of duty was to call a grand council meeting of several thousand Choctaws to unite the nation and recruit volunteers to fight. Pushmataha assembled a force of more than 700 fighters and Jackson promoted him to the rank of lieutenant colonel. He and the Choctaw force helped bring an end to the Creek attacks in March 1814 at the Battle Horseshoe Bend, nearly wiping out the entire Creek fighting force. Afterward, Pushmataha was promoted to brigadier general. He and his men joined Jackson’s forces in Florida and helped capture Pensacola in November. They last saw action at the Battle of New Orleans in December 1814, after which Pushmataha and his men returned to Mississippi.

Pushmataha spent the rest of his life negotiating for the rights and land of his people. During the 1820s and 1830s, the U.S. government began forcefully relocating Native Americans west of the Mississippi River. Treaties from generations before fell apart rapidly as state populations grew and more settlers began moving west. In 1820, Jackson, now a Tennessee senator, returned to the Choctaw Nation to demand they give up their lands and move west in order to free up land for white settlers. Pushmataha resisted the proposed Treaty of Doak’s Stand, which required the Choctaw to give up more than half their territory in Mississippi and relocate to what is now Arkansas. He tried to negotiate with Jackson, explaining that the move would force the Choctaw onto already settled land. Instead, Pushmataha wanted Jackson to evict the white settlers. The dispute brought him and other chiefs to Washington, D.C., in 1824. During the negotiations, Pushmataha became sick and died. Jackson visited him at his deathbed and asked if there was anything he could do for him. Pushmataha requested a funeral with full military honors. He received a general’s funeral and was laid to rest in the Congressional Cemetery in Washington, D.C.

Pushmataha used his skills as a warrior and negotiator to serve his people and the Army. Although the U.S. government ultimately took the Choctaw lands and moved them west, Pushmataha believed that as chief, his role was to work with the government to fight for his people. Though he never achieved his ultimate goal, he proved himself in battle and at the negotiating table. Today, Pushmataha is considered the Chief of Chiefs of the Choctaw.

“American Indian Removal: What Does It Mean to Remove a People?” National Museum of the American Indian. Accessed February 9, 2021. https://americanindian.si.edu/nk360/removal#titlePage.

“Chief Pushmataha: Have Faith In Who You Are.” Choctaw Journeys to the Past (blog). Accessed February 1, 2021. https://choctawspirit.wordpress.com/2019/01/21/chief-pushmataha-have-faith-in-who-you-are/.

Lincecum, Gideon. Pushmataha: A Choctaw Leader and His People. Tuscaloosa: The University of Alabama Press, 2004.