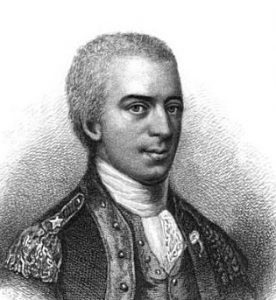 Brig. Gen. Samuel B. Webb served as a militia and Continental Army officer during the American Revolution. An infantry commander and aide-de-camp to Lt. Gen. George Washington, he fought at the battles of Bunker Hill, Long Island, White Plains, and Trenton. Despite suffering many wounds and capture by the British, Webb served in the Revolution for almost the entire war. Washington regarded him as “the most accomplished gentleman in the Army.” Webb attained distinction as an intelligent, capable, and courageous officer.

Samuel Blachley Webb grew up in Wethersfield, Connecticut, the son of Joseph Webb, a wealthy merchant, and Mehitabel Nott Webb. His mother married Silas Deane after his father died when he was 10 years old. His mother died two years later and Webb relied upon himself to advance in society. At age 19, Webb went to the Caribbean to negotiate a business deal for his family. He started working as an agent for international traders in Wethersfield to support his family’s business. In 1774, he entered into politics when he became an assistant to his step-father, a member of the Connecticut legislature. Webb attended the First Continental Congress after Connecticut selected Deane as a representative to the meeting. There, Webb was first introduced to George Washington.

After the Battles of Lexington and Concord in 1775, Webb joined the Wethersfield Militia Company as an officer. The company marched to join other militia units surrounding the British garrison in Boston. On June 17, 1775 Webb fought in the Battle of Bunker Hill, where British forces drove Patriot militia forces from their position on top of Breed’s Hill. Webb distinguished himself in the battle for his role in organizing the rearguard retreat from Breed’s Hill despite suffering a head wound. After the battle, Maj. Gen. Israel Putnam promoted Webb to major and appointed him as his aide-de-camp. After a year of serving on Putnam’s staff, when the British abandoned Boston in March 1776, Webb joined Washington’s staff as an aide-de-camp.

Aides-de-camp in the Revolution performed important work, especially when serving on the staff of generals. They drafted letters, delivered correspondence, participated in strategic planning, gave orders, and helped execute the duties of generals. Washington believed that aides-de-camp needed to be smart, capable, and talented. Webb joined Washington’s staff in June 1776, and participated in the summer and fall campaigns of the Continental Army. Washington relied upon Webb as a battlefield assistant to carry messages to the front-lines, often braving enemy fire to accomplish his missions. At the Battle of White Plains on October 28, 1776, enemy fire wounded Webb in the leg and killed his horse. At the Battle of Trenton later that year, Webb crossed the Delaware River in the same boat as Washington. After landing, enemy musket fire drove Webb from his horse, wounding him as he delivered Washington’s orders. He left the Army after the battle to heal from his serious wounds. While recovering, Washington promoted Webb to colonel and ordered him to raise and lead a new regiment, the 9th Connecticut Regiment.

Webb, alongside Maj. Gen. Samuel H. Parsons, helped recruit and train the 9th Connecticut. He led the regiment in its first battle at the Battle of Setauket on Long Island, New York in August 1777. However, Loyalist forces stalled Webb and Parsons and forced them to retreat. In December 1777, Webb returned to Long Island where a British ship captured his boat, claiming Webb as a prisoner of war. During his imprisonment, the British granted him parole so long as he did not take any actions to help in the war effort. During this period, Webb married Elizabeth Bancker.

In May 1781, after three years, the British released Webb in a prisoner exchange and he returned to his duties. Webb met Washington and the Comte de Rochambeau at Wethersfield on May 19, 1781, where they planned the Yorktown Campaign. For the rest of the war, he led the 3d Connecticut Regiment. After the war ended in 1783, Webb became a merchant in New York City. He was a founding member of the Society of the Cincinnati and officiated Washington’s first presidential inauguration. In 1790, Webb married Catherine Hogeboom; His first wife and infant son died during the war. They had nine children and settled in Claverack, New York. He died on December 3, 1807. Respected by his fellow officers, friends, and peers, Webb’s service in the American Revolution contributed to American victory and independence.

Ankeney, Kirk and David Vigilante. “George Washington: First in War, First in Peace, and First in the Hearts of His Countrymen.” Library of Congress. Accessed August 6, 2021. https://www.loc.gov/classroom-materials/george-washington-first-in-war-first-in-peace-and-first-in-the-hearts-of-his-countrymen/.

“Lesson Plans.” The American Revolution Institute of The Society of the Cincinnati. https://www.americanrevolutioninstitute.org/lesson-plans/.