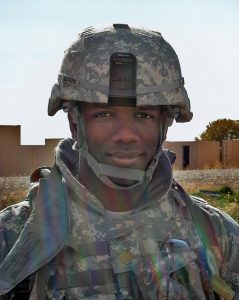 Alan Greg Rogers was born on September 21, 1967, in New York City. Soon after his birth, Rogers’s birth father was arrested and sent to prison. His birth mother, unable to support Rogers on one income, put him up for adoption. Rogers lived in The New York Foundling, an orphanage, until he was 3 years old when he was adopted by George and Genevieve Rogers, a devout working-class family from the Bronx. In 1977, at the age of 9, his family left the Bronx and moved to Hampton, Florida, upon Genevieve’s retirement. Leaving New York City for a town with a population of only 400 people was a great shock to a young Rogers, who responded by burying himself deep in study of the Bible.

While growing up in Florida, Rogers attended Hampton Elementary School but went to middle and high school in the neighboring city of Starke, Florida. Friends from this time describe Rogers as quiet and reserved, but that he got along with everyone. He preferred to sit under a tree during recess to read his Bible and would occasionally bring a bucket of freshly-picked pecans from the tree in his backyard to snack on. In middle school, he was the only eighth-grader to use a briefcase, and his clothes were always pressed and tucked. Though quiet, Rogers was an intellectual; he joined the debate team in high school. After high school, he attended a local community college before joining the Army. This surprised many of his friends, but Rogers explained that the Army granted him opportunities that he only could have dreamed of if he had stayed in Florida. 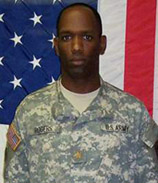 Rogers enlisted in 1990 and was deployed to Kuwait as a chaplain’s assistant for his first tour in December of that year. He was stationed with the 8th Battalion, 43d Air Defense Artillery, which provided Patriot Missile support against the Soviet-made Scud missiles deployed by Saddam Hussein’s Iraqui army. Rogers earned two Kuwait Liberation medals during his first deployment in the Gulf War. After returning stateside, he attended the University of Florida on an ROTC scholarship and graduated in 1995 with a bachelor’s degree in theology. That year, he was also ordained a minister at his local church, Ebenezer Missionary Baptist Church in Florida. He then accepted an Army commission and was stationed in Arizona where he earned his master’s degree in Organizational Management from the University of Phoenix before deploying to South Korea.

In 2000, Rogers’s father died of a heart attack, and his mother died just two years later. He preached at his mother’s funeral at Ebenezer Baptist. In 2004, Rogers was chosen to be part of an elite Department of Defense program to attend Georgetown University for a master’s degree in Public Policy. This offer was extended to just 20 officers across the service branches. At this same time, he was chosen for a prestigious internship in biometrics at the Pentagon with the Joint Chiefs of Staff. After graduating from Georgetown with his second master’s degree, Rogers became the lead biometrics officer in Army Intelligence. With the prevalence of improvised explosive devices (IEDs) in use against U.S. forces in the Middle East, Rogers became invaluable within the Pentagon for his expertise gained during his internship. A new field at the time, biometrics were used to track the sources of IEDs and were a valuable part of counterinsurgency warfare. His coworkers at the Pentagon described him as fearless, not afraid to brief a room full of generals.

Rogers led a very compartmentalized life between those who knew him from Florida, in the Army, at the Pentagon, and those in Washington, D.C. After moving to the District in 2004 to attend Georgetown, Rogers became very active in the city’s gay community and attended Pride festivals in Baltimore and D.C. He was also a member of the Washington chapter of American Veterans for Equal Rights (AVER). Within six months of joining AVER, he was elected chapter treasurer and membership coordinator. He had many friends in the military and at the Pentagon who did not know that he was gay, though this is most likely due to the Army’s “Don’t Ask, Don’t Tell” policy of the time. Rogers railed against this policy, writing his graduate thesis on the matter, a fact that many of his friends in the gay community used as proof of his openness.

In 2007, Rogers was deployed to Baghdad, Iraq, with the 1st Brigade, 1st Infantry Division in a Military Transition Team. His team was embedded with a unit of Iraqi soldiers and Rogers was responsible for supervising their training. On the morning of January 27, 2008, he was on a routine patrol when an IED rigged to a guardrail exploded, killing Rogers instantly. The exact circumstances surrounding Rogers’s death are unclear; one story claims that he was out on a Humvee patrol, while the other claims that he was on a foot patrol when the IED was triggered. Regardless of the circumstances, America lost a hero. Following his death, Rogers’s commanding officer wrote to his family that “As God would have it, he shielded two men who probably would have been killed if Alan had not been there.” Maj. Rogers was laid to rest on March 14, 2008, with full military honors at Arlington National Cemetery. At his funeral, an Army chaplain remarked that Rogers would be remembered as “one of the heroes of history.” He was posthumously awarded the Purple Heart and his second Bronze Star. 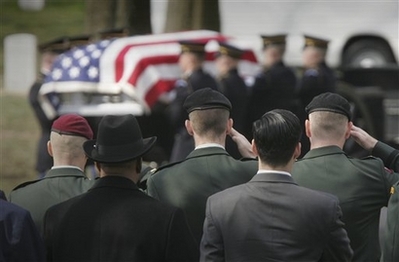 Alan G. Rogers was a devoted son, a Christian, and an American hero whose life was cut tragically short before he could reach his full potential. Rogers had scores of friends that described him as having a knack for bringing people together. They also remember his great strength as a listener who could bring out the best in anyone, only later did anyone realize that he never really talked about himself. Those who he served with called him the “Preacher,” and he served them back with counsel, an attitude of positivity, and motivational speeches. Rogers led a life of selfless service ministering to and in the service of others. He cared deeply about his family, his fellow servicemen, his friends, and the defense of his nation.