The Tomb of the Unknown Soldier

Americans have long sought ways to honor those who made the ultimate sacrifice to their country. Today in Arlington, Virginia, the public is welcome to do so daily by bearing witness to the Changing of the Guard. The tradition honors the Tomb of the Unknown Soldier, a tribute to unidentified members of the military lost in service. The Tomb, first erected in 1921, is located in Arlington National Cemetery. It holds the remains of servicemen from World War I, World War II, and the Korean War. Throughout the day, a Soldier replaces a comrade in a symbolic ceremony.

Arlington National Cemetery is a national military burial ground located across the Potomac River from Washington, D.C. During the Civil War, the U.S. Congress authorized the federal use of land for the burial of war casualties. The chosen land was a part of Arlington Estate. The estate was desirable because of its high ground, pleasant views, and most notably, embarrassment to the estate’s residents, the Lee family. On May 24, 1861, a month after Virginia’s secession from the Union, Union Soldiers seized the estate. The first Soldier was buried there in 1864 after mounting casualties in Lt. Gen. Ulysses S. Grant’s Overland Campaign in Virginia necessitated military burial ground. Brig. Gen. Montgomery C. Meigs, quartermaster general in charge of finding land for military burials, designed the Civil War Unknowns Monument to memorialize the unrecovered and unidentifiable American Soldiers. The remains of 2,111 Union Soldiers were honored there in 1866. Northern newspapers and public opinion approved this “righteous [use]” of Lee’s land. After the U.S. Supreme Court resolved property disputes over the land in 1883, it became a permanent military reservation. 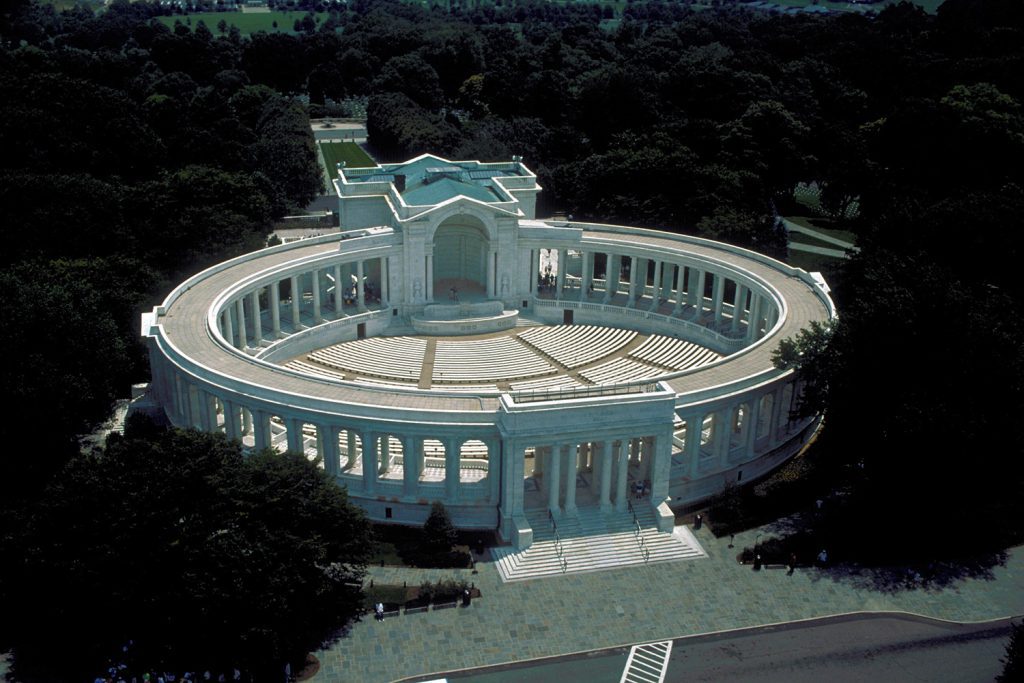 Today, famous military and government figures lie in Arlington National Cemetery, such as President John F. Kennedy and Chief Justice Earl Warren. Soldiers killed in action or honorably discharged from the Armed Services are eligible for burial in Arlington. However, space is limited, and selection is thus competitive. Memorial Day has been celebrated at Arlington National Cemetery since its first observation in 1868. The Civil War Unknowns Monument was incorporated into future Memorial Day celebrations, indicative of the deep connection between Americans and their fallen Soldiers.

The modern Tomb of the Unknown Soldier was conceptualized at the end of World War I to continue the American tradition of honoring Soldiers. Soon after the November 11, 1918, armistice, the United States joined Great Britain and France in honoring their mass casualties that remained unfound after the war. American Expeditionary Forces collected the remains of four unidentified American Soldiers from French cemeteries. Sgt. Edward Younger, a well-decorated Soldier stationed in Chalon, France, at the time, chose one casket of the four to be sent back to the United States. The USS Olympia transported the casket across the Atlantic in fall of 1921. Previously, in March, 1921, the U.S. Congress approved the burial of the unidentified casualty on the east landing of the Memorial Amphitheater. Upon its initial building, the tomb was positioned at the head of the World War I Unknown grave. At 11:11 a.m. on November 11, 1921, chosen to honor Armistice Day, President Warren G. Harding, Vice President Calvin O. Coolidge, and Chief Justice William H. Taft accompanied the casket to Arlington National Cemetery. They presented the Medal of Honor and Distinguished Service Cross to the deceased before interment. Architects planned to create a tomb structure on top of the initial grave, but it was not completed until 1931. 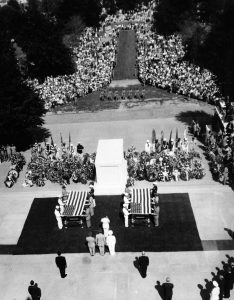 Last rites for the Unknown Soldiers of World War II and the Korean War, May 30, 1958. National Museum of the U.S. Navy

Additions were next made to the Tomb after World War II and the Korean War. President Dwight D. Eisenhower, a veteran of both World Wars, felt strongly about honoring those who served their country. He first signed a bill renaming Armistice Day. The newly-named Veterans Day remained on the anniversary of the armistice of World War I, but honored all American military veterans. Eisenhower specifically wished to honor the unknown dead of World War II and the Korean War. In 1956, unidentified remains from the European and Pacific Theaters of World War II were selected and evaluated for identification. They joined the body of a Korean War Soldier on the USS Canberra. Among them, one Soldier from World War II and one from the Korean War laid in state in the U.S. Capitol before being interred in May 1958. The remaining casket was honored with a sea burial. Upon burial of the Unknowns at the monument, they were also bestowed with the Medal of Honor. The honoring of such remains symbolized all those military personnel who were not found or identified while serving, and whose acts of bravery and patriotism are unknown.

Additions to the tomb have been made several times, but only once were remains removed. The remains of 1st Lt. Michael J. Blassie, of the United States Air Force, were interred in the Tomb in May 1984 as the “Vietnam Unknown.” A fellow serviceman spotted Blassie’s plane going down outside of An Loc, Vietnam, in May 1972, though the crash recovery took several months. The remains found were suspected to be Blassie’s, but a flawed forensics technique refuted the suspicion. Blassie was entombed until 1998, when mitochondrial DNA testing advanced to allow for testing at his family’s request. Upon his identification, he was transferred to his home in St. Louis, Missouri. The Vietnam Tomb has remained empty with the Medal of Honor, and today honors “America’s Missing Servicemen.” 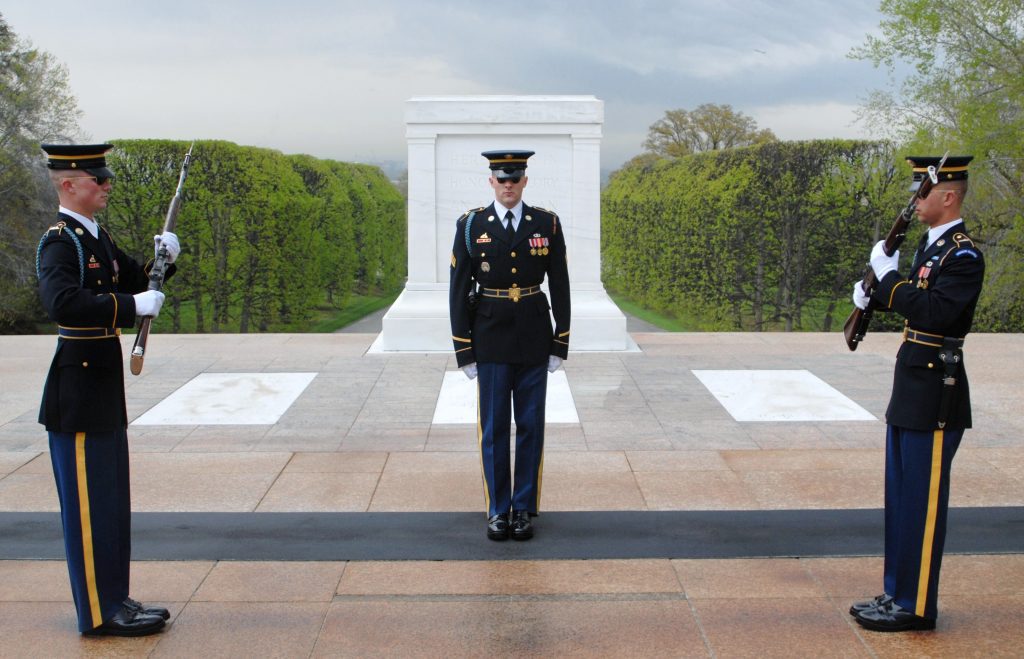 The Tomb was first protected by a civilian in 1925 to prevent tourists from walking over it. A military guard from the 3rd Cavalry, at the time posted at Fort Myer, Virginia, soon replaced them. In 1948, the 3rd U.S. Infantry Regiment, known as the Old Guard, was reactivated and took over the post at the Tomb. As the oldest active regiment in the Regular Army, it was designated the official ceremonial unit of the U.S. Army. While guarding the graves, sentinels continuously repeat a ceremonial procedure. They march 21 steps southward down the black mat behind the Tomb, turn left, face east for 21 seconds, turn left, face north for 21 seconds, and take 21 steps down. The repetition of the number 21 represents the 21 gun salute, the highest military honor offered to a Soldier. This procedure repeats until the changing of the guard.

It is an honor and challenge to become a sentinel of the Tomb. To do so, a Soldier in the Old Guard must volunteer to serve, prove their athletic ability, learn a detailed history of Arlington National Cemetery, and pass a two week training period with further testing. Even after successful completion of these requirements, the Tomb Guard Identification Badge is temporary. It is only upon satisfactory completion of their first nine months that the badge becomes permanent. It can then be worn the rest of the Soldier’s career. Less than 20% of volunteers from the Old Guard earn the badge—the total only reaching 683 sentinels in the Tomb’s hundred-year history. Sentinels in each relief, or rotation, look uniform. Not only do they each wear the Army dress blue uniform, but they are also approximately the same height and weight. The Old Guard has notably remained at their posts through extreme weather events, such as Hurricane Sandy in 2012. 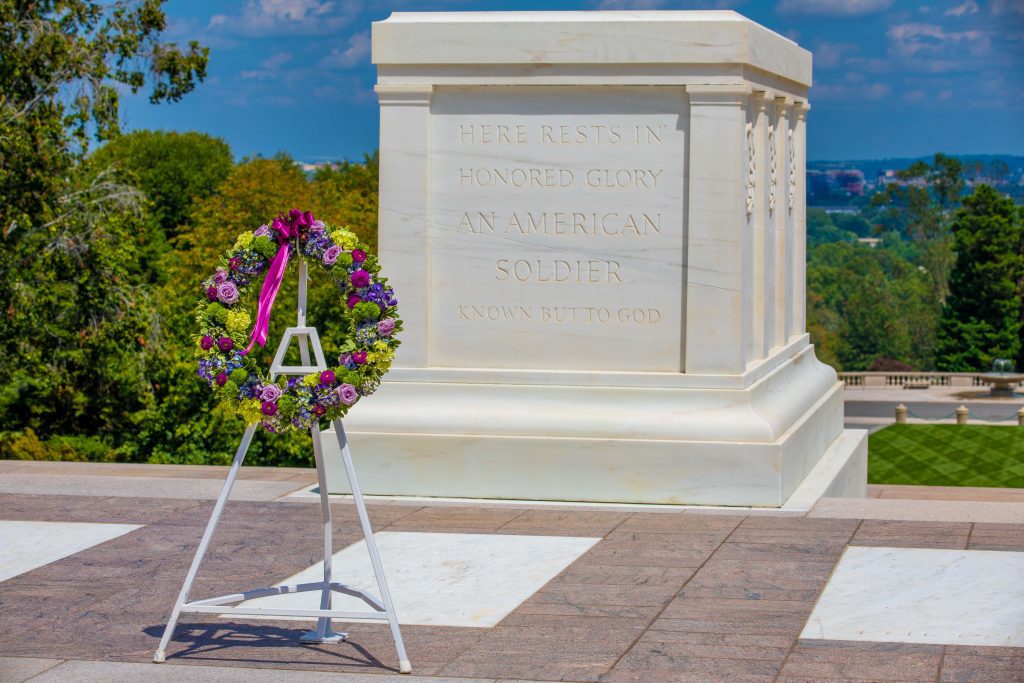 Tomb of the Unknown Soldier with a wreath laid by UK Secretary of State for Defense, The Rt Hon Ben Wallace MP, on July 12, 2021. U.S. Army

On several occasions each year, including Memorial Day and Veterans Day, a wreath is laid at the Tomb. For many, the Tomb represents the sacrifices made by so many Soldiers throughout U.S. history. Millions of people visit Arlington National Cemetery each year to pay their respects to those buried there. The West panel of the tomb reads, “HERE RESTS IN/ HONORED GLORY/ AN AMERICAN/ SOLDIER/ KNOWN BUT TO GOD”.

“Lying in State or in Honor.” Architect of the Capitol. Accessed March 11, 2021. https://www.aoc.gov/what-we-do/programs-ceremonies/lying-in-state-honor.