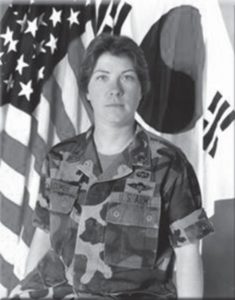 Being a Soldier comes with dangers on and off the battlefield. Though the Army teaches its core values to every Soldier, such as selfless service, loyalty, and respect, some choose to live outside of the rules. Whenever a Soldier steps out of line, others must lend a hand and address the issues. At times, misbehaving Soldiers can even put the lives of others at risk, resulting in tragedy. Sgt. 1st Class Jeanne Balcombe sacrificed her life to protect her fellow Soldiers from one of their own who acted outside the Army values and chose violence. Her sacrifice shows the embodiment of the core principles of the Army and the willingness of Soldiers to put their life on the line to protect their comrades from harm.

Jeanne Margaret Hamilton was born and raised in McMinnville, Oregon where she spent most of her life. She did not join the Army directly out of high school but eventually enlisted in 1984. Hamilton was initially a parachute rigger upon enlisting in the Army and served in that role for four years until she decided to join the Military Police. Established in September 1941, the Military Police Corps plays a key role in protecting Soldiers and civilians who work on Army posts worldwide. Hamilton spent her first years in the Army serving at various posts along the west coast and Europe, during which, she met her husband Mike Balcombe a noncommissioned officer in the Army. After serving in the U.S. for over ten years, Jeanne Balcombe received her first deployment to Asia and went to Korea in 1998.

While in Korea, she served at Camp Red Cloud in Uijeongbu, South Korea, located between Seoul and the Demilitarized Zone (DMZ). Balcombe served as part of the 55th Military Police Company charged with running the protection and security of the entire base alongside South Korean troops. Along with keeping the base secure from outside threats, Military Police often have to deal with situations involving Soldiers on post. By all accounts, Balcombe was a model Soldier that not only lived by the Army’s core values but challenged her fellow Soldiers to uphold the same standards.

While on patrol the morning of August 21, 1999, Balcombe spotted two members of her platoon out of their barracks and intoxicated. Both Soldiers were under the legal drinking age and had used their pass to get off post to go and drink in town. When she spotted them around 4 a.m., she immediately revoked both of their passes. She took the youngest Soldier to the medical building to test his blood alcohol level. After Balcombe took the younger Soldier away, the older Soldier, Jacob Bowley, became irate that she had taken his pass from him. Balcombe continued on with the younger Soldier to the medical offices, but Bowley decided to retaliate. Soldiers were not allowed to carry weapons on post, so Bowley struck and knocked out a Korean soldier on gate duty, stealing his gun. He then made his way toward the medical office.

Balcombe was with the younger intoxicated Solider overseeing his tests when Bowley barged into the building. He was furious at both Balcombe and the other Soldier and pointed the gun in their direction, threatening to shoot them. Balcombe immediately took action, moving in front of the gunman to protect her fellow Soldiers and tried to calm him down. Bowley fired three shots at Balcombe, killing her almost instantly. However, due to Balcombe’s quick action, the other Soldiers had time to escape from the room. After shooting Balcombe, Bowley fled the medical office, stole a car, and left the base. The U.S. Army and Korean Police immediately started searching for him. Bowley made it roughly 300 miles before Korean Police arrested him a day later trying to withdraw money from an ATM.

Bowley stood trial for murder and begged for forgiveness. He argued that the alcohol caused him to overreact and stated that he deeply regretted his actions. Ultimately, his plea fell short, and the court sentenced Bowley to 56 years in prison. Though Bowley will likely serve the rest of his life in prison, the Army lost a dedicated and selfless Soldier in Balcombe. Balcombe not only made her Soldiers live up to high standards and follow the Army’s core values, but she also lived and practiced them herself. Her sacrifice saved the lives of her fellow Soldiers that night, illustrating her determination to uphold the high ideals of the Army.