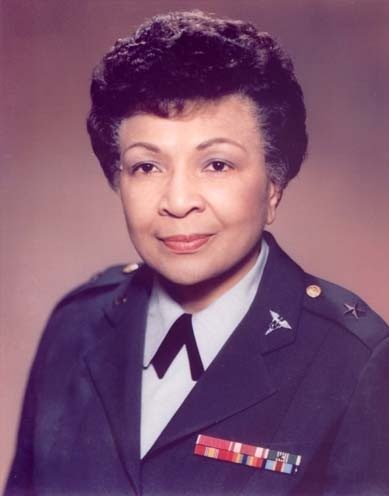 From a young age, Hazel Johnson wanted to be a nurse. Born in 1927, the daughter of farmers grew up in West Chester, Pennsylvania. She worked hard and excelled at school with the goal of attending nursing school. Upon graduating from high school in the last 1940s, however, West Chester School of Nursing rejected her admission due to her race. It was not uncommon for institutions to limit or bar acceptance of people of color in this period. This prejudice affected Johnson throughout her life, though in her own words, “race is an incidence of birth.” Johnson moved to New York to train at the Harlem Hospital School of Nursing, a school specifically for Black women. She trained in Harlem for several years before returning to her family in Pennsylvania. There, she found a job at the Philadelphia Veterans Association. Through this position, she became familiar with the Army Nurse Corps. The travel and opportunities offered by the Army Nurse Corps intrigued her, and she enlisted in 1955. Only seven years earlier, the Army Nurse Corps was racially integrated when President Harry S. Truman signed Executive Order 9981.

Johnson-Brown spent her career serving both the Army Nurse Corps and her Pennsylvania community. During her first tour, she served in the 8169th Hospital in Camp Zama, Japan. Upon her return to the United States in 1957, Johnson-Brown left the Army and returned to her role at the Philadelphia Veterans Association. She then completed her Bachelor of Arts degree in Nursing from Villanova University. While doing so, Johnson-Brown committed to the Army Nurse Corps’ Registered Nurse Student Program. She returned to active duty at Madigan General Hospital (now Madigan Army Medical Center) in Washington state upon her graduation in 1959.

After returning to active duty, Johnson served in several leadership roles in the Army Nurse Corps. She transferred to Walter Reed Army Medical Center in Washington, D.C., where she worked from 1960 to 1962. Having discovered a love of education, she attended Columbia University Teachers College. There, she earned her Master of Science in Nursing Education. Johnson’s passion for teaching continued for the rest of her career. She trained nurses for service both in the operating room and in combat medical tents in Vietnam. The Army sponsored Johnson’s Doctor of Philosophy in Education Administration degree from Catholic University in 1973. While earning her degree, Johnson became director and assistant dean of Walter Reed Army Institute of Nursing. After a tour as chief nurse in Seoul, South Korea, she earned a historic promotion in 1979. The Army nominated her to serve as the Chief of the Army Nurse Corps. Brig. Gen. Johnson was the third female general and first Black female general in the Army, at a time when white nurses outnumbered Black nurses 12 to 1 in the United States. This indicated a continuation of the racial discrimination Johnson-Brown experienced while applying for nursing school 30 years earlier.

Aware of this imbalance and its consequences, Johnson used her role and influence to improve equality in the Army Nurse Corps. She developed scholarships for Reserve Officer Training Corps (ROTC) nurses and encouraged enlistment by offering summer nursing clinical camps for ROTC cadets to increase diversified enrollment. She also drafted the first Army Nurse Corps Standards of Practice, a standardization of procedures for Army nurses. Later, Johnson established Army nursing conferences to facilitate sharing nursing research, promoting and publicizing the work of nurses.

She was briefly married to David Brown in the early 1980s. Johnson-Brown retired in 1983, but continued to set standards in the nursing field. She taught at the nursing schools of Georgetown University and George Mason University throughout the 1980s. During her time teaching at George Mason, she helped found the Center for Health Policy, Research, and Ethics, an institution that continues to promote independent research. The veteran served the Army yet again in 1990. While many of its employees were deployed to Iraq, she volunteered at the Fort Belvoir Community Hospital.

Johnson-Brown’s legacy in nursing education was well-rewarded and continues to live on. Among the many awards she received are the Distinguished Service Medal and Army Commendation Medal. She earned the title “Army Nurse of the Year” twice. In the words of her West Chester peers, she “[rose] above the many barriers facing African American women and men in the last century.” Johnson-Brown spent the last years of her life living with her sister, Gloria, in Wilmington, Delaware. She passed away in 2011. Upon her death, the U.S. House of Representatives passed a Joint Resolution in her honor commending her “significant contributions to the nursing profession and her dedication to the U.S Army.” She is buried at Arlington National Cemetery.