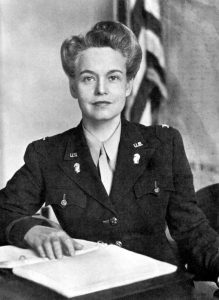 Throughout her long career in journalism, politics, and the U.S. military, Oveta Culp Hobby earned the respect of all who worked with her. Among many positions, Hobby served as the first director of the Women’s Army Corps, second female cabinet member, and president of the “Houston Post.”

Despite the many limitations faced by women in the early 20th century, Hobby found ways to succeed in male-dominated fields from a young age. Born in Killeen, Texas, in 1904, Oveta Culp grew up admiring her father, an attorney and Texas state legislator. She visited him in his office daily and reportedly read the Congressional Record at the age of ten. After graduating from Temple High School, she attended Baylor Female College (today known as the University of Mary Hardin-Baylor) briefly, but her true interest lay in the law. Hobby sat in on law classes at the University of Texas School of Law, but women were not formally admitted. Unable to earn a law degree, Hobby instead applied her knowledge of the field to serve as legislative parliamentarian, an expert on parliamentary procedure, for the Texas House of Representatives at the age of 21. Her success in the role inspired her to run as a Texas legislative representative herself, but she lost the 1930 race.

Hobby next embarked on the field of journalism with her husband. In 1931, Hobby married family friend and former Texas Governor William P. Hobby. Together, they worked at the “Houston Post,” where Hobby rose from reporter to president to co-owner and publisher alongside her husband. They lived in Texas through the 1930s and had a son and a daughter. The couple’s success in media continued as they purchased a local radio station, KPRC. In 1937, Hobby published “Mr. Chairman,” a guide to parliamentary law.

The United States’ involvement in World War II made waves around the country, causing yet another career shift for Hobby. As a well-known figure in politics and journalism, she headed the War Department’s Women’s Interest Section, promoting opportunities for women to contribute to the war effort. While women have participated in American war efforts since the Revolution, nursing was the only organized role for women in the Army. By 1942, the U.S. Congress approved the founding of the Women’s Auxiliary Army Corps. Upon its founding, Army Chief of Staff General George C. Marshall appointed Hobby the first director of the organization, renamed Women’s Army Corps (WAC) when it was integrated into the U.S. Army in 1943. Hobby was promoted to the rank of colonel and continued to head the corps. As director, Hobby’s role was to advocate for women’s involvement in the Army. Having researched instances of women’s army corps in Europe, she traveled around the country to promote female enlistments. Hobby built the framework for the WAC, from redesigning the uniform to quadrupling the number of occupational specialties WAC members could take on. Hobby worked herself to the point of exhaustion and resigned in the summer of 1945. For her efforts, she was the first woman to earn a Distinguished Service Medal for her work with the WAC throughout the war.

After resigning from the WAC, Hobby returned her attention to politics. She campaigned for Republican candidate Dwight D. Eisenhower in the 1952 presidential election. Upon his inauguration, President Eisenhower named Hobby as head of the Federal Security Agency, a non-cabinet position. Hobby was able to sit in on cabinet meetings, however, and her opinion was respected. In 1952 Eisenhower created the Department of Health, Education, and Welfare (today known as the Department of Health and Human Services) to replace the Federal Security Agency, and named Hobby as the new department’s secretary. Among the accomplishments of her tenure was the approval and planned distribution of the polio vaccine. Hobby resigned from the position in 1955 and returned to Texas to tend to her ill husband and the “Houston Post.” She again took up the role of president and editor of the newspaper. Eisenhower reportedly considered her as a successor for the Republican nomination at the end of his presidential term, but Hobby declined interest.

Hobby committed the rest of her life to spending time with her family, though she still made regular public appearances. Over a dozen colleges and universities offered her honorary degrees, including that which she attended in her youth, the University of Mary Hardin-Baylor. She served on the boards of several nonprofit and social development organizations, and continued her public service, traveling to Vietnam in 1966 with the Vietnam Health Education Task Force. A Texan at heart, Hobby was especially touched by honors bestowed upon her by the Texas community, such as the opening of a library in her hometown with her namesake, and her induction into the Texas Women’s Hall of Fame in 1984. Hobby lived the rest of her life in Texas and passed away there in 1995.