On June 15, 1775, the Continental Congress appointed George Washington commander in chief of the military forces gathering outside of Boston. He left a few days later on a journey that would have him away from home for the next eight years. As he left, he wrote affectionately to his beloved wife Martha, one of the two letters that survive of the hundreds they exchanged.

The winter of 1775 brought an end to the campaign season and with it the realization that armed conflict would continue into the next year. Washington grasped that, unlike his British counterparts who left their troops during winter camp, he had to stay. Without his presence, the Army would fall apart. Though confident in his ability to lead, Washington was sensitive to criticism and bedeviled by the second guessing of some officers and Congress. He sent for the one person whose support was unconditional. Martha’s response was to pack her trunk. And so began an annual pilgrimage, lasting through eight years of war.

Elizabeth L. Maurer, the Museum’s Chief of Programs and Education, explores Martha Washington’s trips to winter camps. Discover the culture of camp life and how her presence contributed to the morale of an Army and catapulted her into a symbol for a nation. Prior to joining the Museum, Ms. Maurer held positions at Colonial Williamsburg and George Washington’s Mount Vernon where she developed historical programs about the Washingtons.

This program is offered VIRTUALLY and IN-PERSON on Tuesday, July 12, 2022. Museum guests may attend in-person. Seats are limited and available on a first-come, first-served basis. 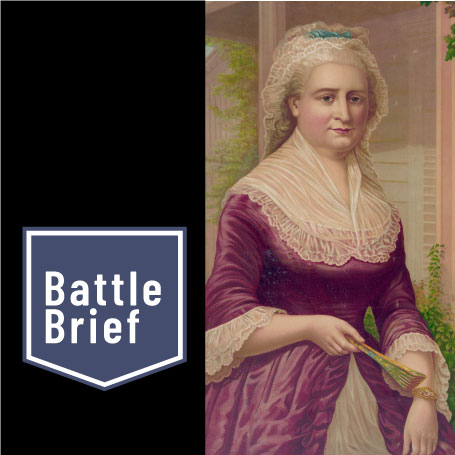