Women of the Long Gray Line: More than 5,000 women have graduated from the U.S. Military Academy since 1980 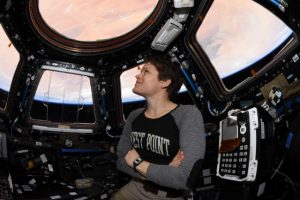 Lt. Col. Anne McClain, Class of 2002, spent 6 1/2 months aboard the International Space Station from December 2018 to June 2019. She is the first female West Point graduate to become an astronaut. (Photo Courtesy of NASA)


At 5:31 p.m. on Dec. 3, 2018, the engines on the Russian Soyuz MS-11 spacecraft roared to life on a launch pad in Kazakhstan. As bright orange flames erupted from the engines, the spacecraft lifted off the ground and began its journey to the International Space Station.


Dressed in a white and blue spacesuit, Army astronaut Lt. Col. Anne McClain sat in the windowless capsule along with a Russian cosmonaut and a Canadian astronaut. It was her first launch, and she says at first it felt like she was in the simulator where she’d spent countless hours preparing for this moment. Then the spacecraft started to rumble as the engines ignited and it hit her that, “Oh gosh, this is different. This is the real day.”