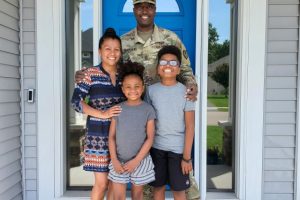 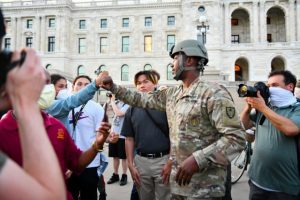 Minnesota National Guard Master Sgt. Acie Matthews Jr. peacefully engages with protesters to show solidarity and request compliance with the state curfew at the grounds of the Minnesota state capitol in St. Paul, June 1, 2020. The Minnesota Guard has activated troops to protect citizens and infrastructure as people protested on the steps of the capitol building. (Sgt. Linsey Williams)


ST. PAUL, Minn. — As Master Sgt. Acie Matthews Jr. walked past a group of loud protesters next to Minnesota’s state capitol building Monday, one of its organizers targeted him with her loudspeaker.


“These people aren’t here for us! They’re here to keep us oppressed,” Matthews recalled the protester saying to him and other National Guard members.


Instead of ignoring her, Matthews, an equal employment opportunity advisor who had been checking on other troops in the area, decided to stop and listen.


After the activist cracked a joke, telling her fellow protesters to not be scared since Guard members cannot shoot well, Matthews saw it as an opening to have a more meaningful conversation.


“Unknowingly, on her part, that was the icebreaker that we needed to step in to engage the community,” said Matthews, who has served 19 years in the Army.


He laughed at the joke, clapped his hands and approached the crowd of about 200 protesters, with his uniform and combat helmet standing out among them.


In an attempt to get on common ground, he asked if anyone could come up and recite a non-denominational prayer. A young man stepped forward and said one. Afterward, Matthews embraced him and briefly spoke to him.


“We’re on the same team,” he said he told the protester. “This is Minnesota’s Army. We’re not some outside force that just came in here. We’re here for the people of the great state of Minnesota.”


Just a week before, George Floyd, a 46-year-old African-American man, died after being arrested by police about 10 miles away in Minneapolis. Four police officers have since been charged for their involvement in his death.


The incident sparked protests across the country, some of them even resulting in riots where Matthews calls home.


At least 2,500 Minnesota Guard members are now activated to assist local law enforcement and fire departments. Matthews currently works out of the joint operations center, where he’s been tracking activity in the state.


“We’re ensuring that they have the security they need to go out and perform their jobs,” he said in an interview Wednesday.


The Minnesotan force is part of a massive Guard response to the civil unrest and COVID-19, which has about 75,000 troops activated nationwide. It is the largest Guard activation since 51,000 troops were called up after Hurricane Katrina struck the Gulf Coast in 2005.


On Wednesday, Army senior leaders published a letter to the entire service, reminding Soldiers and Army civilians they took an oath to protect the Constitution, which states that people can peacefully assemble and petition the government for a redress of grievances.


“We will continue to support and defend those rights, and we will continue to protect Americans, whether from enemies of the United States overseas, from COVID-19 at home, or from violence in our communities that threatens to drown out the voices begging us to listen,” a portion of the letter read.


At times, though, it has been hard to do so in the face of aggressive protesters. A Soldier in the Minnesota Guard, along with others around the nation, was verbally berated by protesters while on a recent mission.


Yet, in spite of the insults, he kept his cool.

“He maintained his military bearing and stood firm,” Matthews said. “And he stayed there because he’s there to protect their right to do that protest.”


The senior NCO has been impressed with how his teammates have reacted to those types of situations.


“It’s difficult, but I think it shows that in our organization, from the top-down, we are here to support the folks of Minnesota,” he said. “We’re not here to engage in any kind of violent activity.”


In one of his press conferences, Maj. Gen. Jon A. Jensen, adjutant general for the Minnesota Guard, made it clear that his force was “all in” for this mission.


“I took it and ran with it,” Matthews said of his message. “I tell our Soldiers before they go out on their missions, ‘We’re all in for the people of Minnesota.’ And it’s just amazing to get to go out there and put it into action versus just saying words.” 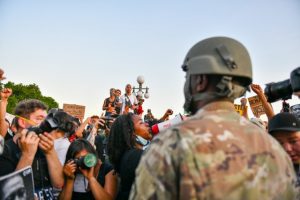 
A resident of Brooklyn Park, a suburb of Minneapolis, Matthews said the majority of demonstrations in the area have been peaceful. He also often sees activists trying to put some of the few bad actors in line.


During Monday’s dialogue, he said a couple of hostile protesters wanted to challenge him on political issues, but he respectfully declined to openly discuss them. When they kept pushing, another protester intervened and reminded them that the Soldiers were here to protect everyone and were not their enemy.


It’s as if “we created new allies for us in the field,” Matthews said.


That alliance was strengthened when Matthews, who mediates as part of his role as an EEO advisor, decided to address the crowd to ease the tension.


“None of us want to see anybody get hurt,” he said in a video of the exchange posted onto YouTube. “None of us are happy about the current situation and the reason we got to be out here right now. But it’s all love, and we have to remember that we are all brothers and sisters.


“Change doesn’t come as quick as you want it to, but it’s important that we don’t continue to tear things down as we look to move forward.”


After speaking, the protesters cheered in solidarity and proceeded to chant: “UNI-TY! UNI-TY!”


A smiling Matthews then headed deeper into the crowd, meeting more protesters and listening to them.


The protester, who had criticized him with her loudspeaker moments before, spoke into it again and thanked him for his openness.


“It was amazing to me just to see how, in a matter of about two or three minutes, she changed everything she had going on,” Matthews said. “Because she was able to see us as human beings as opposed to an occupational force.”


And Matthews agreed with her and the other protesters who chanted “unity” after his remarks.