[Source: “The Eight Essential Characteristics of Army Officership: BE A STUDENT OF HISTORY”, The Field Grade Leader, Organizational Leadership in the US Army, Web, July 12, 2020] 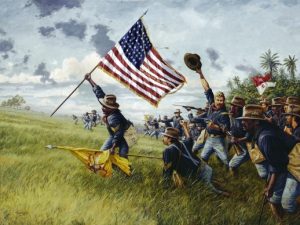 As a professional, you must immerse yourself in your profession. Military history is full of lessons and examples that you can compare to your situation. “Top block” officers read history and apply it regularly in their work. Taking the time to learn from the past will increase your ability to answer the tough questions when they arise.


Soldiering is among the oldest professions, and the officer corps has existed for as long as written history itself. You are now part of that legacy. The leadership challenges you may face on and off the battlefield are not new. From tactics and strategy to unit morale and discipline, examples of both success and failure are easy to find. You have the opportunity and responsibility to learn from the mistakes of others as well as build on their past successes. During my time as an Assistant Professor of Military Science and throughout my military service generally, it became clear many members of our profession fail to take advantage of the lesson’s history provides. Those who take the time to study military history almost uniformly outperform those who do not. A little after-hours effort on your part will pay dividends as your eyes are opened to the legacy of those who have come before you. To help you get started on your journey this article is divided into two parts: finding a professional hero to emulate, and some historical examples of how to solve some common leadership challenges.


As a professional, you must immerse yourself in your profession. Military history is full of lessons and examples that you can compare to your situation. “Top block” officers read history and apply it regularly in their work. Taking the time to learn from the past will increase your ability to answer the tough questions when they arise.


Find a professional hero to emulate


Do you desire to be a selfless leader? Do you seek to put the needs of your Soldiers and nation above your own? Do you want to make the difficult right choice as opposed to the easy wrong one? Where do you start? How do you begin? Becoming an officer of character and integrity is a long deliberate process. The good news is you do not have to start from scratch. The road map has been provided for you by history.


From ancient commanders like Marcus Aurelius and Scipio Africanus to more recent leaders such as Generals Schwarzkopf and Mattis, good examples of leadership are easy to find. Taking the time to read about these leaders and applying their situations and decisions to your own will give you a foundation on which you can establish your own leadership philosophy. When General Patton was a young man, he studied and drew strength from great commanders. His deliberate efforts played a vital role in his obvious success.


My personal professional hero is Ulysses S. Grant. Studying his life has taught me to never give up on my goals, even in the face of overwhelming adversity. He was slandered and drummed out of the Army as a Captain, failed in multiple business ventures, and was rejected for Civil War service no less than four times. A lesser man would have given up, but Grant did not. Because he knew his reputation had been tarnished, he continued to request service in the Army until he received an appointment to a minor post in a state adjutant general office. He worked tirelessly and eventually gained a battalion command which launched a career that led to the White House. His example shows me that a clear conscience, raw talent, and determination can overcome any obstacle.


Second Lieutenant Norman Schwarzkopf was shocked when he arrived at his first assignment with the 101st Airborne Division. He was fresh out of West Point and Airborne School and thoroughly unprepared for the bad examples of leadership he saw. His commander regularly drank on duty and compensated for incompetence by belittling his subordinates. His commander was also skilled at putting on a show when the leadership was around, which resulted in a very toxic environment. He decided not to let this experience affect his love of the Army and instead did his best to take care of his Soldiers and to keep the company on track. After many months of covering for his commander, he made the decision to report him to the chain of command. This brave action resulted in the company commander being removed and an improvement in unit effectiveness and morale. His experience teaches us we can improve the lives of our Soldiers and the effectiveness of our unit when we are true to the Army Values and stand up to those who are not.


Instill good order and disciple in a troubled unit


A young Captain Erwin Rommel faced a tremendous morale and discipline problem when he took command of an understrength infantry company full of forcibly transferred German sailors after World War I. His men were angry and refused to follow orders. His solution was to empathize with his men. He told them he had prayed for the safety of the German Sailors during the war and that his prayers had been answered by his being given command of a unit made up of sailors. He told them he was grateful to be their commander. His compassionate and firm leadership and Non-Commissioned Officer support resulted in vast improvements to the organization’s morale and effectiveness. His experience teaches us that the right leader can improve even the most demoralized and ineffective organizations.


Respond positively to a perceived less than ideal assignment


When Lieutenant John “Blackjack” Pershing was placed in command of a company of African American “Buffalo Soldiers,” many of his peers told him it was the end of his career. Instead of being discouraged, Pershing embraced the opportunity to command Soldiers who had earned such a fierce reputation. He treated his men with dignity and respect and was so successful that he commanded a series of units each at higher levels of responsibility, culminating with Supreme Command of the American Expeditionary Force in World War I. His nickname of Blackjack was first given as an insult but became a supreme compliment as Soldiers of many races followed him into battle in the Great War. His experience teaches the importance of finding the positive in every assignment and providing all our Soldiers with equal opportunities to excel.


Studying and applying military history will give you the tools you need to face difficult leadership challenges throughout your career. The examples above are just a few of what is available. I challenge you to learn about your profession, think about your situation through the lens of history, and then make your own mark on our legacy.


While the proceeding chapters are by no means comprehensive, Officers who adhere to these principals will be given the opportunity for increased responsibility. The Army needs and rewards good leaders. If you strive to be a true professional, take care of your Soldiers, and solve problems within the commander’s intent, you will have an amazing Army Story regardless of the branch you serve in. Your story begins with the oath you take as a young lieutenant, but it does not end there. Leadership is earned every day by the choices you make. Choose to learn, choose to serve those you are trusted to lead. Choose to be worthy of the special trust and confidence given to you by the American People. Above all, choose to be the type of leader you yourself would be proud to follow.