The American and French victory at Yorktown in October 1781, was one of the most pivotal events of the Revolutionary War (1775-83). After a three-week siege in Virginia’s Tidewater region, beleaguered British forces under General Charles, Lord Cornwallis surrendered to an allied army led by General George Washington, effectively ending major military operations in the new United States, and guaranteeing American independence. How did Washington’s Continental Army and their French allies force the capitulation of a major British field army along the York River? How did Cornwallis get trapped in fortifications around Yorktown, unable to be rescued by the Royal Navy and redcoat soldiers?

In this two-part program, military historians Dr. John Maass and Dr. Britt McCarley examine this decisive event in our nation’s early military history. On September 6, Maass explores the sprawling campaign in the months before the siege that led to the British defeat. In operations that ranged from Rhode Island to North Carolina, this presentation focuses on Cornwallis’s invasion of Virginia, the Marquis de Lafayette’s attempts to defend the state, and the movements of both armies—and navies—to Yorktown. McCarley takes up the story on September 13, with an in-depth analysis of the siege, including logistics, fortifications, artillery and General Washington’s key role in the triumph.

J. Britt McCarley, Ph.D. is the U.S. Army Training and Doctrine Command’s chief historian and has served in the Army Historical Program since 1988. He is the author of the Army Center of Military History’s publication on the Atlanta and Savannah Campaigns, 1864, and is now writing on the Yorktown Campaign. He is one of the Army’s leading staff ride facilitators, including those covering the Siege of Yorktown for the last 25 years.

John R. Maass, Ph.D. is an education staff member of the National Museum of the U.S. Army at Fort Belvoir. He received a Ph.D. in early American history at The Ohio State University, and is the author of several books and numerous articles on early U.S. military history, including “Defending a New Nation, 1783-1811” (2013); “The Road to Yorktown: Jefferson, Lafayette and the British Invasion of Virginia” (2015); and “George Washington’s Virginia” (2017).

Register for the VIRTUAL Battle Brief on September 6 at 7 p.m. ET 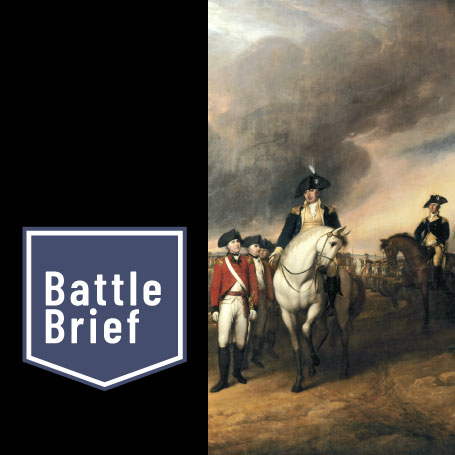