“To Destroy and Lay Waste”: The Burning of Washington, 1814

Two years after the start of the War of 1812 pitted the young United States against its powerful nemesis Great Britain, weary Americans endured a destructive invasion in the Chesapeake Bay region by Royal Navy ships and marauding British redcoats led by Admiral George Cockburn. During the summer of 1814, King George III’s quick-moving forces raided Maryland and Virginia, defeated Americans in battle, then devastated the nation’s capital at Washington, D.C. Hear the compelling story of the war’s low point for President James Madison and the new nation, as well as American resilience after the raid in what many patriots called “the Second War for American Independence.” Museum educator John Maass and historian Glenn Williams use maps, images, and participant descriptions to bring this fascinating campaign to life.

Dr. John R. Maass is an education specialist at the National Museum of the United States Army, and a former officer in the 80th Division of the U.S. Army Reserve. He received a B.A. in history from Washington and Lee University, and a Ph.D. from the Ohio State University in early U.S. history and military history. He is the author of several military history books, including “The Battle of Guilford Courthouse: A Most Desperate Engagement,” “The Road to Yorktown: Jefferson, Lafayette and the British Invasion of Virginia,” and “Defending a New Nation, 1783-1811.”

Dr. Glenn F. Williams was a historian at the U.S. Army Center of Military History at Fort McNair, Washington, DC. He has served as the historian of the National Museum of the U.S. Army Project, the Army Lewis and Clark Bicentennial Commemoration, and the National Park Service’s American Battlefield Protection Program. He is the author of a number of books and articles, including the award-winning “Year of the Hangman: George Washington’s Campaign against the Iroquois” and “Dunmore’s War: The Last Conflict of America’s Colonial Era.” He holds a Ph.D. in history from the University of Maryland.

Register for the VIRTUAL Battle Brief on October 4 at 7 p.m. ET 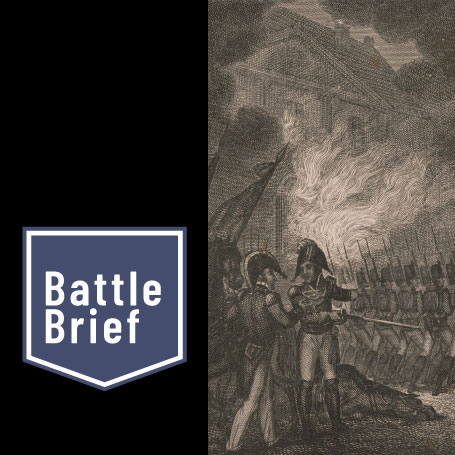