On May 15, 1864, at New Market in Virginia’s Shenandoah Valley, a small Union force commanded by German-born Maj. Gen. Franz Sigel clashed with Confederates led by Maj. Gen. John C. Breckenridge, the former Vice President of the United States and a Democratic presidential candidate in 1860. Sigel’s advance up the Valley was part of Lt. Gen. U.S. Grant’s overall strategy to put pressure on all Confederate armies in Virginia simultaneously. The resulting battle was an all-day, sprawling engagement that included heavy fighting inside the small crossroads town in Shenandoah County, and the famous charge of the Virginia Military Institute cadets on the Bushong farm.

Learn more about this remarkable battle from the National Army Museum’s John Maass and Kevin M. Walker, Chief Executive Officer of the Shenandoah Valley Battlefields Foundation as they discuss key elements of the conflict including General Sigel’s leadership, civilians in the town during the fighting, parts of the battlefield rarely visited today, and the action on the field where Union army hopes of victory were violently dashed.

Keven M. Walker is the Chief Executive Officer of the Shenandoah Valley Battlefields Foundation, and was previously a ranger, cultural resources specialist, and the acting cultural resource program manager at Antietam National Battlefield. He is also the author of “Antietam: A Guide to the Landscape and Farmsteads” (2010).

Dr. John R. Maass is an education specialist at the National Museum of the United States Army, and a former officer in the 80th Division of the Army Reserve. He received a B.A. in history from Washington and Lee University, and a Ph.D. from the Ohio State University in early U.S. history and military history. His most recent book is “The Battle of Guilford Courthouse: A Most Desperate Engagement” (2020).

Register for the VIRTUAL Battle Brief on November 8 at 7 p.m. ET

Get a Museum General Admission ticket on Tuesday, November 8 to attend IN-PERSON at 12 p.m. ET. 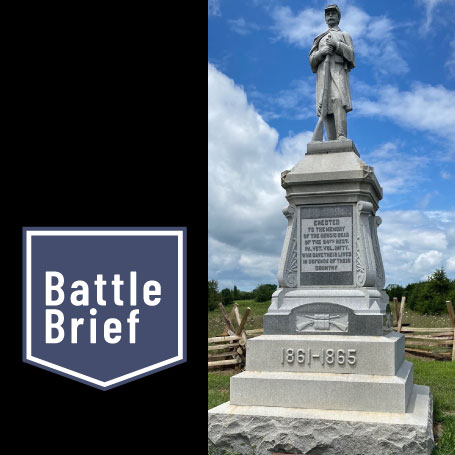