Now an open space enjoyed by the public, Fort Hunt, Virginia, about 15 miles south of Washington, D.C., was the site of one of the highest-level, secret operations during World War II. Here, the most senior Nazi prisoners were interrogated, and captured German documents were translated and analyzed. Another section helped American airmen evade capture and smuggled radios, maps, another contraband to Americans held in POW camps.

The American servicemen at Fort Hunt, codenamed PO Box 1142, were bright, hard-working, and dedicated. Many of them were Jews who had escaped Nazi Germany as children. They were perfect for the difficult and complex job at hand. They never beat German prisoners but used other tricks to gather information.

“Nazis on the Potomac” by Robert Sutton tells the previously untold story, based upon oral history interviews with the veterans who worked at Fort Hunt.

Robert K. Sutton recently retired as chief historian of the National Parks Service after 33 years in the service. He has published a number of books including “Stark Mad Abolitionists: Lawrence, Kansas, and the Battle Over Slavery in the Civil War Era” (2017).

Register for the “Nazis on the Potomac” Book Talk 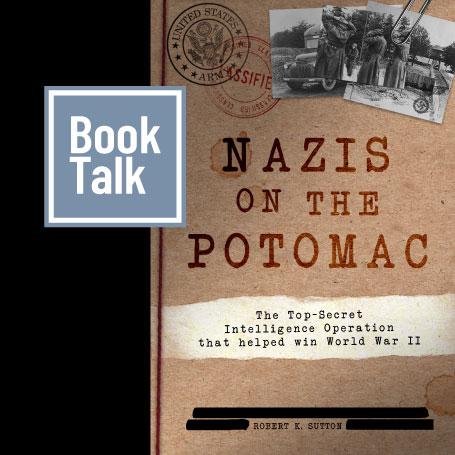