Half American: The Epic Story of African Americans Fighting World War II at Home and Abroad by Matthew F. Delmont

Over one million Black men and women served in the American military in World War II. They were at Normandy, Iwo Jima, and the Battle of the Bulge, serving in segregated units and performing unheralded but vital support jobs, only to be denied housing and educational opportunities on their return home. Without their contributions to the war effort, the United States could not have won the war. And yet the stories of these Black veterans have long been ignored in favor of the myth of the “Good War” fought by the “Greatest Generation.”

“Half American” is American history as you’ve likely never read it before. The book outlines stories of Black heroes such as Thurgood Marshall, the chief lawyer for the NAACP, who investigated and publicized violence against Black troops and veterans; Benjamin O. Davis, Jr., leader of the Tuskegee Airmen, who was at the forefront of the years-long fight to open the Air Force to Black pilots; Ella Baker, the civil rights leader who advocated on the home front for Black Soldiers, veterans, and their families; James Thompson, the 26-year-old whose letter to a newspaper laying bare the hypocrisy of fighting against fascism abroad when racism still reigned at home set in motion the Double Victory campaign; and poet Langston Hughes, who worked as a war correspondent for the Black press. Their bravery and patriotism in the face of unfathomable racism is both inspiring and galvanizing.

Dr. Matthew Delmont is the Sherman Fairchild Distinguished Professor of History at Dartmouth. He was awarded a Guggenheim Fellowship and National Endowment for the Humanities (NEH) Public Scholar Award to support his recent research. He is also the author of several previous books, including “Black Quotidian: Everyday History in African American Newspapers” (2019); “Making Roots: A Nation Captivated” (2016); and “Why Busing Failed: Race, Media, and the National Resistance to School Desegregation” (2016). Originally from Minneapolis, Minnesota, he earned by B.A. from Harvard University and MA and Ph.D. from Brown University.

Register for the “Half American” virtual book talk 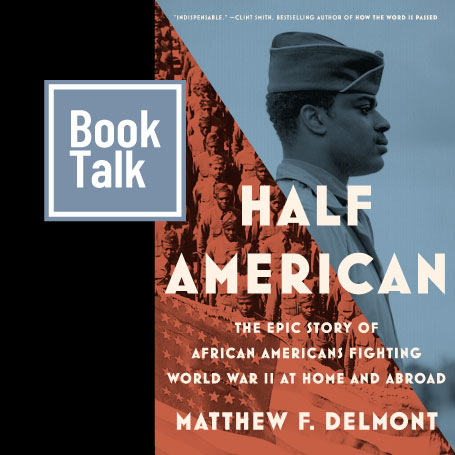