Many weapons and inventions were credited with winning World War II, most famously in the assertion that the atomic bomb “ended the war, but radar won the war.” What is less well known is that both airborne radar and the atomic bomb were invented in British laboratories, but built by Americans. The same holds true for many other American weapons credited with the Allied victory: the P-51 Mustang fighter, the Liberty ship, the proximity fuze, the Sherman tank, and even penicillin all began with British scientists and planners, but were designed and mass-produced by American engineers and factory workers. Churchill’s American Arsenal chronicles this vital but often fraught relationship between British inventiveness and American technical might.

Prize winning historian Larrie Ferriero’s presentation explores how, at first, leaders in each nation were deeply skeptical that such a relationship could ever be successful. But despite initial misunderstandings, petty jealousies, and continuing differences over priorities, scientists and engineers on both sides of the Atlantic found new and often ingenious ways to work together, jointly creating the weapons that often became the decisive factor in the strategy for victory that Churchill had laid out during the earliest days of the conflict. While no single invention won the war, without any one of them, the war could have been lost.

Larrie D. Ferreiro is an engineer, historian and the author of several award-winning books in history, science and technology, and was the 2017 Pulitzer Prize finalist in history for his book “Brothers at Arms: American Independence and the Men of France and Spain Who Saved It.” He teaches at George Mason University in Virginia and Stevens Institute of Technology in New Jersey. 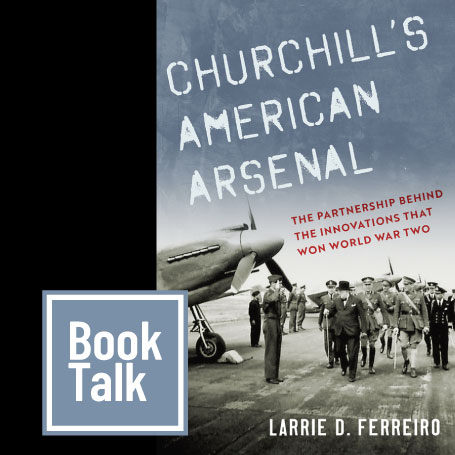