Not War But Murder: Malvern Hill and the Seven Days Battles, 1862

In June 1862, a large, well-equipped Union army was poised only a few miles outside the beleaguered Confederate capital, Richmond, Virginia. Commanded by the youthful Maj. Gen. George B. McClellan, the Army of the Potomac had slowly advanced up the swampy peninsula between the James and York Rivers, seemingly ready to capture the rebel city and end the war.

The rebels, however, had no intention of caving in. Under the aggressive leadership of the recently-appointed General Robert E. Lee, the outnumbered Confederate Army of Northern Virginia launched an offensive to throw back the Yankee invaders and defeat McCllelan’s Army of the Potomac in a week-long series of engagements called the Seven Days Battles. This culminated in the bloody Battle of Malvern Hill, which ended the Union threat to Richmond. Learn from military historian John Maass about the week’s bloody fighting, McClellan’s curious leadership style, and his insubordinate relationship with Abraham Lincoln, with period maps and images, along with modern views of the battlefields today.

Dr. John R. Maass is an education specialist at the National Museum of the United States Army, and a former officer in the 80th Division of the Army Reserve. He received a B.A. in history from Washington and Lee University, and a Ph.D. from the Ohio State University in early U.S. history and military history. His most recent book is “The Battle of Guilford Courthouse: A Most Desperate Engagement” (2020)

Register for the VIRTUAL Battle Brief on January 10 at 12 p.m. ET

Register to attend IN-PERSON on Tuesday, November 8 at 12 p.m. ET. 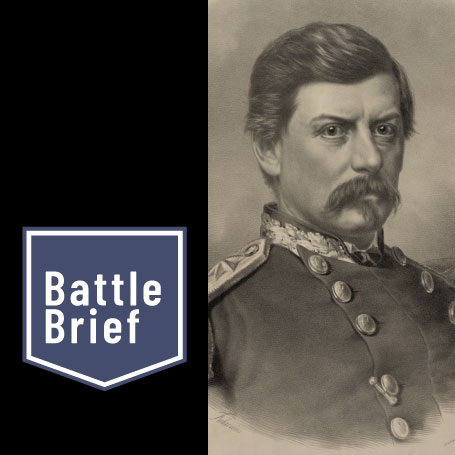