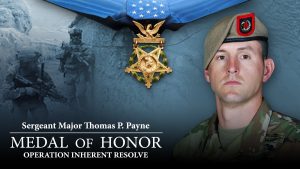 WASHINGTON — An Army Ranger who risked his life to save dozens of hostages facing imminent execution by ISIS fighters will be awarded the Medal of Honor, the White House announced Thursday.


Sgt. Maj. Thomas “Patrick” Payne, who is assigned to the U.S. Army Special Operations Command, was part of a joint task force that assisted Iraqi security forces Oct. 22, 2015, in raiding an ISIS prison near Hawija in northern Iraq.


Payne and his teammates liberated 70 hostages — many of whom were captured Iraqi security forces personnel — after a request by the Kurdistan Regional Government.


Soldiers had to quickly rescue the hostages amid heavy enemy gunfire and suicide-vest detonations during the contested nighttime operation, which left one U.S. Soldier and at least 20 insurgents dead.


“Time was of the essence,” Payne said in an interview. “There were freshly dug graves. If we didn’t action this raid, then the hostages were likely to be executed.”


After being infilled by CH-47 Chinook helicopters, Payne and members of the task force climbed over a wall into the prison compound. Payne, an assistant team leader at the time, helped lead his team as it cleared one of the two buildings known to house hostages.


Once inside the building after light resistance from the enemy, Payne said his team used bolt cutters to pierce through the locks of a prison door, freeing nearly 40 hostages.


Payne and others then heard an urgent call for help over the radio from other task force members engaged in an intense firefight at the second building. 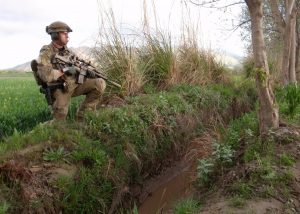 Then-Staff Sgt. Thomas “Patrick” Payne pulls security while on a deployment in Afghanistan in 2010. Payne, an Army Ranger and now a sergeant major, will receive the Medal of Honor after he risked his life to save dozens of hostages facing imminent execution by ISIS fighters in northern Iraq in 2015. (Courtesy photo)


Payne and his team maneuvered about 30 yards to the heavily-fortified building, which was partially on fire.


Once there, he and others scaled a ladder onto the roof of the one-story building as a sustained rate of enemy machine-gun fire shot out from below. From a vantage point on the roof, they engaged the enemy with hand grenades and small arms fire.


At that point, enemy fighters began to detonate their suicide vests, causing the roof to shake. Payne and others then moved off the roof to an initial breach point on the ground level.


With barricaded enemies firing rounds toward him, Payne entered the structure to open another fortified door. After he managed to cut the first lock, he had to run out due to the heavy smoke and handed off the bolt cutters to an Iraqi partner. After the partner came out for fresh air, Payne took the tool again to sheer off the last lock and kicked open the door.


Still being engaged by the enemy, Payne and others escorted about 30 more hostages out of the burning building, which was about to collapse.


“We had to use speed to our advantage,” he said.


With disregard for his own safety, Payne then reentered the building two more times to ensure every hostage was out. One of those times he had to forcibly remove one of the hostages who had been too frightened to move during the chaotic scene, he said. 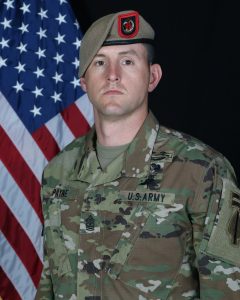 Sgt. Maj. Thomas “Patrick” Payne, an Army Ranger assigned to the U.S. Army Special Operations Command, will receive the Medal of Honor after he risked his life to save dozens of hostages facing imminent execution by ISIS fighters in northern Iraq in 2015. (K. Kassens)


For his actions, Payne was initially awarded the Army’s second-highest award, the Distinguished Service Cross, which was later upgraded to a Medal of Honor.


President Donald Trump will present the medal to Payne on Sept. 11.


Originally from Batesburg-Leesville and Lugoff, South Carolina, Payne joined the Army in 2002 as an infantryman with hopes of becoming an Army Ranger.


Since then, he has deployed several times to combat zones as a member of the 75th Ranger Regiment and in various positions with the U.S. Army Special Operations Command.


He was awarded a Purple Heart after being wounded in a separate 2010 mission in Afghanistan. And as a sergeant first class in 2012, Payne won the Army’s Best Ranger Competition, representing USASOC.


He is married with three children and is currently stationed at Fort Bragg, North Carolina.