On March 2, 1918, a U.S. Army Signal Corps unit boarded the Celtic, a transport ship, destined for England and eventually the battlefields of France. The unit, comprised of female telephone operators, made history as first women to actively support combat operations on a regular basis. In doing so, they paved the way for expanded roles for women both in the U.S. Army and at home.

Telephone communications were vital to the success of U.S. Army operations during World War I. The first troops shipped overseas were members of the U.S. Army Signal Corps to establish telephone lines at the front. These lines required hundreds of operators to connect calls between the front and higher headquarters. The Army turned to French speaking, female, telephone operators to connect calls. Over 200 women served the American Expeditionary Forces in the First, Second, and Third Army Headquarters. The women, nicknamed the “Hello Girls,” worked tirelessly, under at times combat conditions, to connect calls on behalf of the Army.

Jennifer Dubina and Tracy Bradford will trace the service of the Signal Corps telephone operators from the United States to France. Learn more about the commitment, sacrifice and challenges of the Hello Girls during World War I and how their service was critical to effective U.S. Army wartime communications.

Tracy Bradford is the curator at the U.S. Army Women’s Museum at Fort Lee, VA. She has worked in the Army Museum Enterprise for over ten years. Her previous assignment was at the National Museum of the United States Army as a Museum Educator in the Programs and Education Department. Tracy earned a Bachelor of Arts from The College of William & Mary and a Master of Arts from The George Washington University.

Jennifer J. Dubina is a museum educator at the National Army Museum, where she focuses on developing content for educators and students. Prior to joining the Museum, she worked at the National Museum of African American History and Culture; Arlington House, The Robert E. Lee Memorial; and Sagamore Hill National Historic Site in New York. She earned a Master of Arts degree in public history from American University.

Register for the VIRTUAL Battle Brief on March 7 at 7 p.m. ET 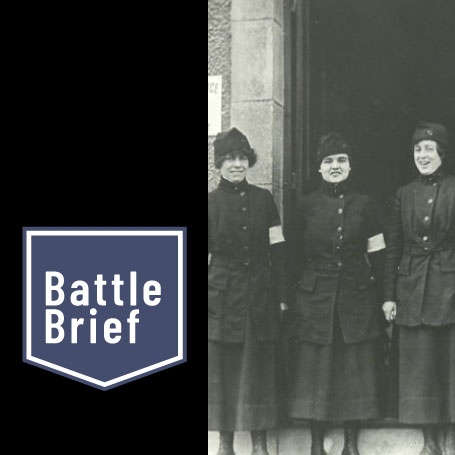