Looking Back at 9/11 Virtual Exhibit

Plan Your Visit
Back

Looking Back at 9/11 Virtual Exhibit
Back

Explore our Public Programs
Back

Browse our events
Back

View Our News & Articles
Back

The Heart of Hell: The Soldiers’ Struggle for Spotsylvania’s Bloody Angle 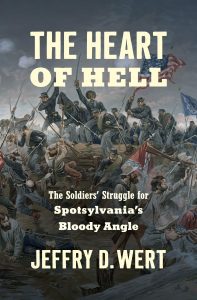 The fierce struggle over the Confederate fortifications during the Battle of Spotsylvania known as the “Mule Shoe” was without parallel during the American Civil War. The massive Union assault that began at 4:30 A.M. on May 12, 1864, sparked brutal combat that lasted nearly 24 hours. By the time Federal forces withdrew, some 55,000 men from the Union and Confederate armies had been drawn into the fury, battling in torrential rain along fieldworks at point blank range in a “seething, bubbling, soaring hell of hate and murder.” Some 17,500 officers and men from both sides had been killed, wounded, or captured by the time the fighting ceased in the dense Virginia woods. The site of the most intense clashes became forever known as the “Bloody Angle,” a notorious part of the famous Overland Campaign that pitted Grant versus Lee.

Learn more from renowned Civil War military historian Jeffry D. Wert as he draws on the personal narratives of Union and Confederate troops who survived the fight to offer a gripping story of Civil War combat at its most difficult.

Jeffry D. Wert is author of many previous books, including “Gettysburg, Day Three,” “From Winchester to Cedar Creek: The Shenandoah Campaign of 1864,” and “The Sword of Lincoln: The Army of the Potomac.”

Register for the “The Heart of Hell” virtual book talk 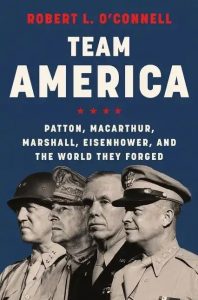 By the first half of the 20th century, technology had transformed warfare into a series of intense bloodbaths in which the line between Soldiers and civilians was obliterated, resulting in the deaths of one hundred million people. During this period, four men exhibited unparalleled military leadership that led the United States victoriously through two World Wars: Douglas MacArthur, George Patton, George Marshall, and Dwight “Ike” Eisenhower; or, as bestselling author Robert O’Connell calls them, “Team America.”

O’Connell captures these men’s unique charisma as he chronicles the path each forged—from their upbringings to their educational experiences to their storied military careers—experiences that shaped them into majestic leaders who would play major roles in saving the free world and preserving the security of the United States in times of unparalleled danger. O’Connell shows how the lives of these men—all born within the span of a decade—twisted around each other like a giant braid in time. Throughout their careers, they would use each other brilliantly in a series of symbiotic relationships that would hold increasingly greater consequences.

The author of “Of Arms and Men: A History of War, Weapons and Aggression,” Robert L. O’Connell has worked for the federal government in both arms control and intelligence. His previous publications include “Of Arms and Men” and “Sacred Vessels.”

Half American: The Epic Story of African Americans Fighting World War II at Home and Abroad 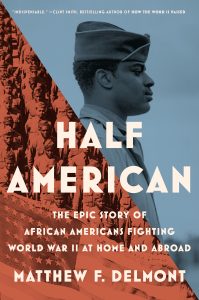 Over one million Black men and women served in the American military in World War II. They were at Normandy, Iwo Jima, and the Battle of the Bulge, serving in segregated units and performing unheralded but vital support jobs, only to be denied housing and educational opportunities on their return home. Without their contributions to the war effort, the United States could not have won the war. And yet the stories of these Black veterans have long been ignored in favor of the myth of the “Good War” fought by the “Greatest Generation.”

“Half American” is American history as you’ve likely never read it before. The book outlines stories of Black heroes such as Thurgood Marshall, the chief lawyer for the NAACP, who investigated and publicized violence against Black troops and veterans; Benjamin O. Davis, Jr., leader of the Tuskegee Airmen, who was at the forefront of the years-long fight to open the Air Force to Black pilots; Ella Baker, the civil rights leader who advocated on the home front for Black Soldiers, veterans, and their families; James Thompson, the 26-year-old whose letter to a newspaper laying bare the hypocrisy of fighting against fascism abroad when racism still reigned at home set in motion the Double Victory campaign; and poet Langston Hughes, who worked as a war correspondent for the Black press. Their bravery and patriotism in the face of unfathomable racism is both inspiring and galvanizing.

Dr. Matthew Delmont is the Sherman Fairchild Distinguished Professor of History at Dartmouth. He was awarded a Guggenheim Fellowship and National Endowment for the Humanities (NEH) Public Scholar Award to support his recent research. He is also the author of several previous books, including “Black Quotidian: Everyday History in African American Newspapers” (2019); “Making Roots: A Nation Captivated” (2016); and “Why Busing Failed: Race, Media, and the National Resistance to School Desegregation” (2016). Originally from Minneapolis, Minnesota, he earned by B.A. from Harvard University and MA and Ph.D. from Brown University.

Register for the “Half American” virtual book talk

This website uses cookies to improve your experience while you navigate through the website. Out of these, the cookies that are categorized as necessary are stored on your browser as they are essential for the working of basic functionalities of the website. We also use third-party cookies that help us analyze and understand how you use this website. These cookies will be stored in your browser only with your consent. You also have the option to opt-out of these cookies. But opting out of some of these cookies may affect your browsing experience.
Necessary Always Enabled
Necessary cookies are absolutely essential for the website to function properly. This category only includes cookies that ensures basic functionalities and security features of the website. These cookies do not store any personal information.
Non-necessary
Any cookies that may not be particularly necessary for the website to function and is used specifically to collect user personal data via analytics, ads, other embedded contents are termed as non-necessary cookies. It is mandatory to procure user consent prior to running these cookies on your website.
SAVE & ACCEPT